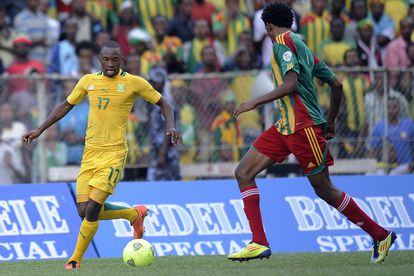 South Africa’s Bafana Bafana have met the Walias of Ethiopia two times in competitive football matches ahead of their Fifa World Cup qualifying double-header in the coming days.

The very first meeting between the two sides came in June 2012 when South Africa hosted Ethiopia in a 2014 World Cup qualifier at the Royal Bafokeng Stadium.

Curiously the pair of 2014 World Cup qualifiers have been the only meeting between two teams at full international level.

Bafana Bafana secured a hard-fought draw after Katlego Mphela equalised for the hosts on 77 minutes. South Africa made much of the play in the fixture after Saladin Said put the visitors in the lead after just 28 minutes.

An early shot from Anele Ngconga forced a save out of Ethiopia’s Sisay Bancha but despite enjoying the lion’s share of possession Bafana were largely restricted to shooting from distance against their organised opponents.

Tsepo Masilela would be the man whose mistake haunted South Africa as he lost out to Said who then rifled a shot beyond Ithumeleng Khune in South Africa’s goal. He would also be forced off the pitch with injury moments later.

Mphela produced a fine finish to restore parity late in the game but despite a frantic finish, Bafana couldn’t make their dominance of possession pay. The result extended a nearly year-long winless run for the national team and by the time the sides next met, Pitso Mosimane would be replaced by Gordon Igesund in the coaching hot seat.

Watch | Hugo Broos slams TWO players for lack of professionalism. BOTH miss out on call-ups!

Bernard Parker would be the man grabbing all the headlines on this day as he first gave South Africa the lead, and then once parity was restored, put through his own net in the moment that decided the match.

Bafana Bafana only needed a draw to stay ahead of Ethiopia on the group table heading into the final round, but Parker spectacularly headed into his own net to leave them needing a favour from the Central African Republic which would not materialise. Ethiopia progressed to round three of the qualifiers where they lost 4-1 on aggregate to Nigeria.

No chance to make amends

Khune, Parker and Eric Mathoho were all in the starting lineup the last time Bafana Bafana met Ethiopia but the trio have not been picked in the 24-man group Hugo Broos named for the upcoming double-header.

Bafana face Ethiopia on Saturday 9 October at the Bahir Dar International Stadium, before the sides meet in the reverse fixture on Tuesday 12 October at the FNB Stadium, a fixture earmarked for the return of fans to SA football venues.

READ: Vaccinated fans to get FREE ENTRY for next week’s Bafana Bafana match

On This Day: What happened on 23 July?