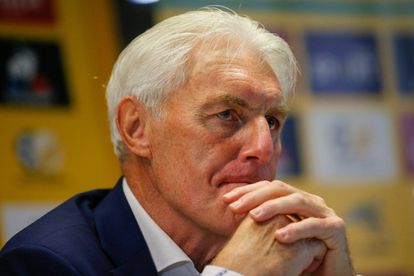 Hugo Broos has a five-year contract with SAFA and is tasked with qualifying for the 2022 Fifa World Cup in Qatar. Photo: Phill Magakoe/AFP

Hugo Broos has a five-year contract with SAFA and is tasked with qualifying for the 2022 Fifa World Cup in Qatar. Photo: Phill Magakoe/AFP

Bafana Bafana coach Hugo Broos made headlines earlier this week when he suggested that there was an agenda against him being executed by the Premier Soccer League.

Former South Africa midfielder Bennett Mnguni doesn’t believe there is any such agenda and thinks that Broos should mind his words in press conferences and media opportunities.

“An international coach will always protect himself. We never get the player’s side of their story. I don’t want to say he is lying and I don’t think there a serious player who would want to miss an opportunity to compete at international level,” Mnguni told Soccer Laduma.

“Sometimes I feel like before making comments about clubs or players through the media, be sure what you are talking about. If there are people who do not respect Bafana Bafana, that is a shame. I can’t take sides because I’m not sure what really happened.”

Broos’ appointment was not met with universal approval but so far the results are going the team’s way and they sit atop their World Cup Qualifying group.

It is a long road to the World Cup with only the group winners progressing to the next round which will see ten teams face off for five places at the 2022 showpiece.

Mnguni feels that Bafana Bafana have a realistic shot of reaching Qatar 2022. If achieved this would be the first successful qualification for the World Cup since Carlos Queiroz guided the team through the 2002 World Cup qualifying campaign.

“We have a chance, youngsters are hungry, these youngsters can achieve anything if they focus on their careers. We have a good chance to deliver good results.”

Bafana Bafana top their qualifying group after three matches following up a draw away to Zimbabwe with a home victory over Ghana and yesterday’s rousing 3-1 win over Ethiopia.

‘Somizi promised to buy me a car’: Mohale Motaung

Finally! Capitec Bank says all digital channels are BACK online