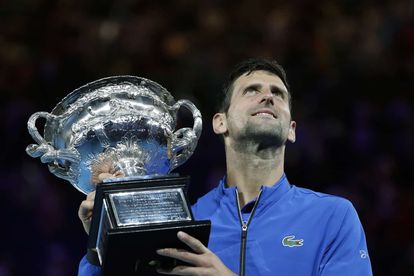 Rafael Nadal said he took a lot of positives out of the Australian Open on his return from injury, despite being thrashed in the final Sunday by Novak Djokovic.

The Spanish second seed had played an outstanding level of tennis at the tournament without dropping a set until her met his arch-rival on Rod Laver Arena.

And he had no answer to the world number one’s booming groundstrokes and precision serve to limp out of Melbourne Park 6-3, 6-2, 6-2.

Here’s a set-by-set breakdown of how it happened

A confident Djokovic opened the match with a serve to love and then promptly broke the out-of-sorts Nadal — remarkably his first service break since round one against James Duckworth. The Serb was being aggressive and Nadal looked rattled. He won only one point out of the first 12 to find himself 3-0 down. Djokovic had a break point to make it 4-0 but the Spaniard hung on to hold and finally got in the match, pumping his fist in celebration. But again the world number one held to love, meaning the sluggish Nadal hadn’t won a point on three Djokovic service games. So bad was Nadal playing that he had a rare air shot — a swing and miss on what should have been a straightforward forehand as Djokovic served to love for a fourth game. Nadal showed glimpses of his best in the next game as he held, but Djokovic was simply too good and served out to easily take the set 6-3.

Nadal was made to look pedestrian by Djokovic in the first set but he came out firing in the second and hit a cracking forehand winner to draw first blood on serve. But he again had no answers to the Serbian’s powerful service game and once more failed to win a point with Djokovic hitting the lines and dominating the baseline rallies.  Nadal, dripping with sweat, couldn’t seem to find his range with his unforced error count steadily creeping up. The top seed got the inevitable break in the fifth game when a cheeky Nadal lob volley sailed just over the baseline after a gruelling rally. A fist-pumping Djokovic held for 4-2, but it was Nadal’s best game so far, pushing it to deuce. Djokovic, though, hit straight back by breaking Nadal once more for 5-2 and again, the world number one’s precision serve punished the Spaniard as he took the set with three big aces.

The supreme Djokovic dropped just six points on serve during the first two sets and astonishingly hit only four unforced errors to Nadal’s 20. He kept the pressure on Nadal in set three but after some sublime rallies, the second seed clung on to his serve to go 1-0 ahead. The Serb held his serve comfortably a forehand long by Nadal handed him two break points in game three and he gleefully converted one of them with a delicate drop shot. Nadal was looking lost and Djokovic consolidated the break to go 3-1 in front with a huge roar from the Serbian showing how much he wanted the title. Against the run of play, Nadal finally got his first break point of the match in game six as Djokovic uncharacteristically made three unforced errors, but he couldn’t convert his rare opportunity. Djokovic served out for 5-3 and completed the rout by breaking again when Nadal sent a backhand long.