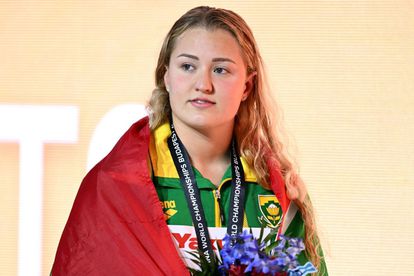 The 17th edition of Africa’s longest running women’s sport recognition platform, is endorsed by the Department of Sport, Arts and Culture, and backed by leading insurance and financial advisory services, Momentum, as naming rights partner.

Van Niekerk’s inclusion in the Momentum Athlete of the Year and Sasol Global Woman in Sport categories comes on the back of an incredible performance on the world stage which saw her win double gold at the 2022 Commonwealth Games in Birmingham.

Alongside Van Niekerk vying for the Momentum Athlete of the Year accolade is Banyana Banyana’s Hildah Magaia, as her brace in the final of the 2022 Women’s Africa Cup of Nations secured the team’s first ever continental crown. South Africa’s first ever Commonwealth Games judo gold medalist, Michaela Whitebooi, rounds out the three nominees.

Joining Van Niekerk in the Sasol Global Woman in Sport Award category is FIFA-accredited referee Akhona Makalima who has been recognised for her ground-breaking achievements which saw her officiate at the recently concluded Women’s Africa Cup of Nations tournament.

After writing her name in the company of the most august of golfing history winning the Women’s British Open, Ashleigh Buhai, also makes the shortlist for the global gong.

Aiming to retain her Brand SA Para Sport Star of the Year title, Kgothatso Montjane’s global achievements have been recognised again this year. Paralympians Anruné Weyers and Louzanne Coetzee have also been nominated in the category.

Footballer Cimone Sauls, GolfRSA No 1 Gabbi Venter and discus star Lesedi Khunou will compete for the SuperSport School Sports Star of the Year award, which shines the spotlight on a young girl in sport 18 years or under, who has excelled athletically, and is seen as a role model to the youth.

Nielsen Sports SA Sponsor of the Year lauds brands who put women’s sport first and will be contested by reigning award winners Hollywoodbets for backing women’s football in the country, Investec who sponsor women’s golf and Sasol as sole headline sponsor of the SA women’s senior national team and the Sasol League.

In the media categories, seasoned broadcasters, Cato Louw and Tumi Kgasoe battle it out with TV producer Nono Xaba for the coveted SuperSport Woman in TV award.

In addition, Louw will also look to defend her Woman in Radio accolade, as she features alongside Thobela FM’s Conny Matjipa and Ligwalagwala FM’s Xolile Mabuza.

The Woman in PR and Sponsorship category promises to be a fierce contest as seasoned professional Emy Casaletti-Bwalya from Opitmize Agency goes up against 2020 Tokyo Olympic Games PR & Communications Specialist Maphuti Hlako, as well as Group CEO of Unorthodox Group, Sibabalwe Sesmani.

The Team of the Year award will be contested by Women’s Africa Cup of Nations champions Banyana Banyana, as well as GolfRSA and the Momentum Proteas team.

The public has been called upon to help choose the winners in the gsport Voting Hall.

Voting will close at midnight on Wednesday, 31 August 2022.

Register a free membership at gsport.co.za and show your support by voting for your favourite.

The finalist with the most votes, who doesn’t go on to win a category, will be declared the Public Choice Award winner.

The Momentum gsport Awards is endorsed by the Department of Sport, Arts and Culture, and supported by Brand South Africa, Nielsen Sports South Africa, Imperial, Sasol, SuperSport and Telkom.

MOMENTUM ATHLETE OF THE YEAR

TELKOM WOMAN OF THE YEAR

EMERGING ATHLETE OF THE YEAR

WOMAN IN PR AND SPONSORSHIP

SUPPORTER OF THE YEAR

VOLUNTEER OF THE YEAR

FEDERATION OF THE YEAR

COACH OF THE YEAR

TEAM OF THE YEAR