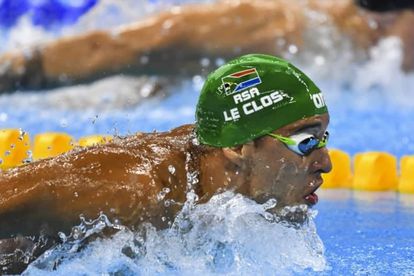 Rugby and England’s tour to these shores aside, South Africa had a fantastic sporting year. The 2016 Rio Olympics was particularly awesome.

Manyonga won silver in the long-jump for South Africa and his story is, without a doubt, one of the most inspiring. Addicted to tik just a few years ago, Manyonga won his fight and jumped to glory. He’s an immensely talented young athlete and, if you’ve watched him recently, he’s only just getting started

2. Caster Semenya’s wonderful run and South Africans backing her all the way

She’s the golden girl of South African athletics and after a tough couple of years, Semenya won gold in the 800m at the Rio Olympics. Not everyone was so stoked, though, but South Africans were fully behind their first lady of running. When Lynsey Sharp had a good old whine about her – and then came last in the Diamond League a few weeks later – Twitter had a field day.

3. Antonio ‘Tony’ Alkana’s parents sold boerewors rolls to get him to Rio #TeamSA

You’re seeing a theme here, right? South Africans are a bunch of resilient people and never is more evident than the sacrifices the athletes, their coaches and their parents make to achieve greatness. Alkana, who represented SA in the 110m hurdles in Rio, got there partly thanks to his parents efforts of selling boerie rolls.

Yep, we’re still on the Olympics. Seabelo Senatla, the World Rugby Sevens Player of the Year 2016, missed out on a medal originally after picking up an injury midway through the competition. Officials rules mean that only players who played in the final of a team tournament get a medal, but Francois Hougaard wasn’t having any of that. He gave Senatla his medal, saying he “deserved it more”. Hougaard eventually got a medal of his own, but that doesn’t make his gesture any less wonderful.

We don’t mean to go on and on about the Olympics, but Luthando Mahlangu is pretty bad ass. At just 14-years old, he won silver at the Paralympics. This kid’s future is so bright, he – and the rest of South Africa – needs shades.

By his impeccable standards, Chad le Clos had a bit of a so-so Olympics. But his effort was still good enough to become South Africa’s most decorated Olympian. As Bert would say: That’s my boy! Unbelievable.

Moving away from the Olympics for just a second… Gary Player completely bossed a hole at the Masters sinking his 31st hole in one at the tender age of 81. Old, but far from cold.

And we’re back with the Olympics. Sunette Viljoen has battled everyone from Sascoc to her family who all but disowned her for being gay. She reaped her rewards at the Olympics when she won South Africa’s ninth medal.

We just want to honour ALL of the Olympians. Lawrence Brittain who was part of the South African men’s rowing pair to win silver, was having chemo just last year.

Henri Schoeman bagged a bronze medal for team South Africa in the triathlon at Rio 2016.  Schoeman never managed a podium finish in a  major world championships until this moment.