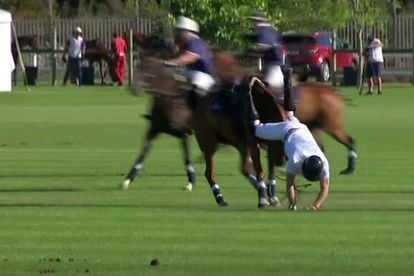 Prince Harry took a tumble this weekend at a fundraising polo match for the charity he set up to help children suffering with HIV and AIDS in Lesotho.

The Sentebale Royal Salute Polo Cup was hosted in Cape Town over the weekend.

After scoring an excellent goal, Harry fell head-first off his horse.

He tumbled again later in the match and a friend of Harry, professional Nacho Figueras, mocked him by falling off his own horse which resulted in fits of laughter from the prince.

Prince Harry takes a bow after falling off his horse

According to the Daily Mail, the event is estimated to raise just under $1 million.