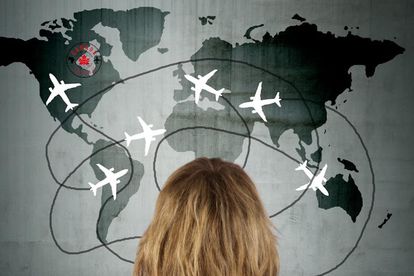 When an object in flight approaches the speed of sound, it reaches a sound barrier. This invisible wall is a force against the object, discouraging it from accelerating any further. For many years, the sound barrier was considered to be impenetrable.

While interesting, this information is not very relevant to my life. It’s true, I do enjoy being a passenger on the occasional commercial flight, but I have no interest in flying a plane at such terrifying speeds.

I have, however, discovered a sound barrier of my very own – an invisible blockage that impedes my ability to move forward.

WHAT IS THAT? A SOUTH AFRICAN ACCENT?

It’s so inconspicuous in fact, that it took me almost three decades to notice it.

It’s 2019, and a close friend has been cast in a live production of Miracle on 34th Street in Toronto, Canada, my current home. I’m proud and excited to watch her perform, so I choose to wear my favorite cocktail dress – an almond-coloured number that matches my skin perfectly.

I can’t find a date, so the pre-show cocktail hour primarily consists of me standing alone in a corner, sipping on mediocre red wine while pretending to text anytime someone holds my gaze for too long.

On my second trip to the bar, I hear something that stops me in my tracks.

It’s the familiar voice of a stranger at the other end of the bar. Well, not his voice, but his accent.

Others in the room may confuse the tall, slender gentleman for being British or even Australian, but I know better. I can recognise the accent of a fellow countryman anywhere. He’s South African, too.

He returns to his family and I return to my corner, mustering up the courage to introduce myself.

READ: Homecomers: Why some South African expats are returning home

THERE ARE 50 000 SOUTH AFRICANS IN CANADA

It shouldn’t surprise me to see another South African in Canada. There are about 50,000 of us, and the number continues to grow. But our community isn’t centralised. Yes, there are a few shops, social media groups, and the occasional event, but nothing more.

Conversely, other immigrant groups have dedicated community centers, business associations, entire neighbourhoods and even TV channels. We may not have the numbers to justify these things, but I’ve always suspected there’s something more to the dispersion.

Snapping back to reality, I make my way across the room toward the man. I’m excited. Nothing feels more like home to me than speaking to those with the same home – those who have breathed the salty air of a coastal South African city, or have eaten Kudu biltong, or have belted out Shosholoza after one too many dops.

I tap on his shoulder.

He takes me in for a moment. “Cape Town,” he says.

He offers no additional information in return

He offers no additional information in return.

The theatre lights flash and I slink off to find my seat. I’m embarrassed. What was that?

Sitting in the dark, I process the brief conversation. I realise that for some reason, I felt an intense urge to prove myself to this man who was barely five years my senior. And when I didn’t get his approval, I felt like a failure. I felt that I was worth less than he is.

I never saw the man again, but the feeling stuck.

Since then, I’ve shared the interaction with many non-white South African family members, friends, and colleagues. What I learned shocked me.

The vast majority reported feeling a similar fight-or-flight response when speaking with white South Africans, particularly those with strong accents. They speak of a barrier, or need to prove themselves. Many go as far as to change their own accents to sound “more white”.

Apartheid ended a long time ago and a lot of the literal barriers are gone. But these conversations serve as reminders that many non-physical barriers still exist – often within our own minds.

To break the sound barrier, an object must go faster than 343 m/s. While interesting, this information won’t break South African barriers.

To break our barriers, we need to move beyond the shame and discomfort.

I don’t actually believe I’m inferior to the man

We must tap into our individual experiences and acknowledge them. Let’s give ourselves permission to have uncomfortable emotions that may not align with our values.

After all, I don’t actually believe I’m inferior to the man at the theatre. But somewhere deep inside of me, the fear of inferiority exists. And I wonder if subconsciously, the feeling of superiority exists within him.

I wouldn’t blame him if it did. He, like the rest of us, are products of a long and complicated history. In recent years, we’ve shrouded ourselves in the shame of it all, tampering away the parts of ourselves that scare us.

However, I’d bet that if we expose those parts to each other – our fears and vulnerabilities – we’ll begin to collectively heal and forgive each other, finally breaking down our barriers.

To continue the conversation, sign up for Shame, Man with Nesh Pillay

The view expressed here are not necessarily those of the staff and management of The South African.