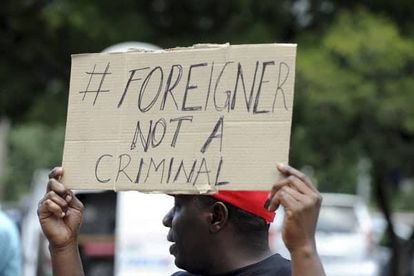 It is taken as axiomatic, unquestionable, that a South African is entitled to a job over an immigrant simply by virtue of their citizenship. Really? Why? On what rational, ethical or moral basis?

I would never want to deny anyone a job, but one simply cannot stay silent while we witness the terrible injustices around the way immigrants are being treated in South Africa and that this behaviour is generally passively condoned because of this erroneous belief that citizenship entitles someone to a job – even when the immigrant is better at it, in fact, may even have created the job or business in the first place.

Politicians, the public, news anchors and commentators, seem to simply accept and nod along even as such beliefs have led to gross human rights abuses – where spaza shop owners and street vendors fear for their lives, where truck drivers and internet ride-hailing taxi operators are pulled out of their vehicles and set alight.

Being undocumented is a victimless transgression, not a ‘serious crime’

And although such attacks are widely condemned, the spurious reasoning on which they are based is not even criticised.

It is such a dubious premise, that many South Africans add justifications to it by dehumanising immigrants, attributing all manner of social ills to them, accuse them of underhand and unfair methods when competing in business, or resort to rigidly legalistic arguments – “they’re illegally in the country, full stop”.

One often hears that being in the country illegally is a “serious crime”. Murder, rape, assault, grand corruption are serious crimes. Being undocumented is a victimless, bureaucratic transgression, nothing more, and in countless cases the fault is not the asylum seeker or the refugee’s fault, but corruption and incompetence at Home Affairs.

We are becoming a dog-eat-dog society

The main impetus for this bigotry is of course economic desperation. People are so desperate in our country for work, they will cling to any excuse to justify why they should have a job over and above someone else, as if the desperation of others, who also have mouths to feed, doesn’t matter. This logic has now reached the micro-level, where a janitor from Mfuleni can’t be allowed to clean a toilet in Khayelitsha, or a petrol attendant from Somerset East be allowed to pump gas at a garage in Cookhouse. We are becoming a dog-eat-dog society, and immigrants are the soft targets. Instead of growing the pie (the economy), we are slicing it into ever-diminishing crumbs to fight over.

As Maruping Phepheng pointed out recently it is not the fault of the immigrant that their own country failed them or that South Africa has failed its local citizens.

The truth is that immigrants are often a cut above their peers back home, whereas the ‘ordinary’ Zimbabwean or Malawian is no better or worse than any South African, the immigrants are very often the ones with the courage, chutzpah, talent and entrepreneurial spirit to go to a foreign country and start from scratch. They work incredibly hard and show initiative. They are therefore often highly employable, not only because of their skills but also because of their disposition and attitude to work. That is why they find themselves promoted or thriving owners of spaza shops and businesses, which unsuccessful locals then envy, or even drive them out, admitting that they can’t compete. Immigrants are to be admired and encouraged, not persecuted.

Dishonest of South Africans to blame immigrants for our high unemployment

It is simply dishonest of South Africans to blame immigrants for our high unemployment. Expelling “illegal” immigrants from the country is a desperate attempt at a quick fix, and of course bound to fail. It will probably hardly make a dent in our unemployment figures; most probably it will make unemployment even worse and damage our economy further.

Immigrants usually have the net effect of creating jobs, or occupy jobs they have invented for themselves, or do jobs locals cannot or do not wish to do.

Once expelled, the job or business or service they provided usually dies with their departure. Where immigrant spaza shops have been driven out, local township residents complain of shortages, high prices and heightened food insecurity.

There is of course harsh competition for certain badly paid jobs, where immigrants are ruthlessly exploited because the employer takes advantage of undocumented people who have no legal recourse. But the answer here is not to expel the victim, but to fix the problem. If immigrants are documented and given the same labour rights, then they will no longer “unfairly” compete for jobs, and unscrupulous employers will find them less exploitable. When undocumented agricultural migrants were allowed in by local unions in Texas, things started to improve for everyone.

SA’s Home Affairs process is hostile to the immigrant

Under apartheid many South Africans fought hard just to be accepted as citizens in their own country, and not to be banished to the Bantustans as “illegals”. Today, they will not tolerate sharing that hard-won space with anyone else it seems. Perhaps South Africans now think of themselves as the Little Europe of the continent – an oasis of relative privilege that wants to keep everyone else out, especially if they are also African. The Department of Home Affairs certain acts that way.

The simple fact is that our immigration process is so hostile and opaque, that economic migrants that should be welcomed, instead quite logically opt for asylum and refugee status. As a result, the Department of Home Affairs rejects over 90% of these applications.

By not allowing people to immigrate efficiently, to work, study, become documented and assimilate, and to foster a vibrant, growing, cosmopolitan society, the South African government and its people have created the very conditions for which it then proceeds to blame immigrants.

And after an immigrant has spent a decade or so in such bureaucratic limbo, during which time she has established her livelihood, already has kids in school, what moral basis can South Africans then claim to expel her, and say she doesn’t deserve a job because she’s not a South African?