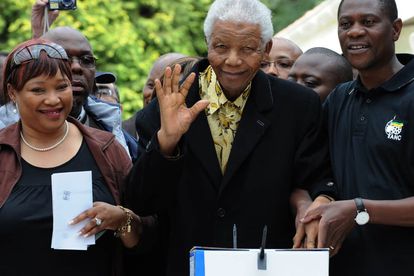 So, the Democratic Alliance has used an image of Nelson Mandela on an electoral poster and some people are up in arms in protest.

The DA claims, with reason, that it has the right to use Nelson Mandela’s name, just like any other South African organisation does, provided that it doesn’t do so for commercial gain, in which case it would require authorisation from the Nelson Mandela Foundation.

Nelson Mandela was, after all, president of South Africa during a very important part of our history. It is for this reason that his statues adorn the front laws at the Union Buildings in Pretoria and the main courtyard in the parliamentary precinct, in Cape Town.

These are public spaces that do not belong to any one political formation but all the people of South Africa.

Some have called for the DA to withdraw from using Mandela’s name. They argue that this party should have, at least, sought permission from Mandela’s family before using his image. They further argue that the same requirement would not be, and is not, needed if it is the ANC that uses Mandela image for electoral campaigning because Mandela was a life-long member of the governing party and, for a period, its president.

A caller into a radio talk show even went as far as to claim that the DA should instead look for white, apartheid era, leaders to use in its campaigning and leave Mandela alone.

All of this constitutes a truly strange, disingenuous, way to celebrate “Mandela’s Way” and to hold it up for others to aspire, especially during these times when real, uniting, leaders are hard to come by.

While Nelson Mandela’s name, given his stature, would be, and indeed is, protected as trademark not to be used for commercial gain and in campaigns that would not be up to the ethos he lived and led by, there cannot be any legal reason for anyone to stop any South African, irrespective of political and ideological allegiance, from using the Nelson Mandela’s image to remind others of we can still be, as a people.

It’s hard to imagine how anyone could legally succeed in preventing the other from celebrating a president they all loved and whose example in leadership firmly demonstrated that it can be done and left them yearning for more, irrespective of the prism from which they look back at Mandela.

If they genuinely care about Mandela’s heritage, those who argue that others do not have the right to use “Mandela’s Way” to inspire should best spend their precious time and other resources teaching the real facts to the worrisomely growing generation of angry young South Africans who consider Mandela a traitor.

These are the potentially dangerous revisionists who seem determined and risk erasing everything that Mandela stood for and has done for South Africa; not an opposition political party using “Mandela’s Way” to remind us all that we can still do better than we have been doing in recent years; that our dream might seem deferred but that it can be revived and saved if we hold hands again from across our stubborn historic laagers, united in our often frustrating diversity.

The revisionists fail to grasp the context in which multiparty negotiations happen and, importantly, how close our country was to a possible bloody civil war that would have no doubt been protracted, had wise leaders on all sides decided to lay their arms down in order to put the interests of South Africa first. They need to look at the state that countries like Syria, Yemen, Iraq, Libya, and other war-ravaged ones find themselves in following a civil war and tell us if that is what they’d have wanted to see happening here.

Too many of the people in the generation of leaders that immediately came after Mandela are strangely quiet when others – mostly ill-informed children – repeat the lie that Mandela sold-out to the National Party in particular and to Whites, in general, and that he – not the party he led – gave-up a lot more during the multi-party negotiations than he should have. The negative noises come from one side, the youngsters who, in their blind rage at the slow pace of change in their personal material lives, will lash out at anything but the living individuals who still lead them in song and dance when they’re the ones who stole a whole decade of potential development from us.

Someone needs to rise above all the unhelpful noises, climb on top of the table if needs be, and shout for everyone to keep quiet and listen. He or she must do so with a copy of our Constitution and Bill of Rights in hand – like the biblical Moses if needs be – and point everyone to these founding documents of our post-apartheid republic, reminding them of the potential in us that still lies unclaimed.

In his relatively short time as president of South Africa, Mandela was good at throwing aside his party hat to replace it with a state president’s hat when the situation called for it, to call people to order.

Because of who he was, Mandela’s name belongs to all South Africans. All of us have a shared responsibility to use this heritage to remain inspired and to inspire others, on one hand, and, on the other hand, the obligation to shield from those who might want to exploit it for selfish commercial ends and in campaigns that might dishonour it.