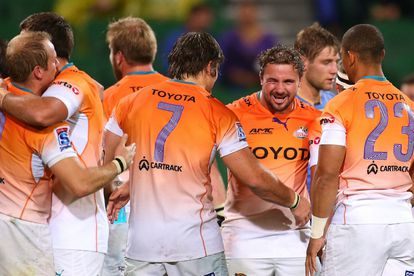 during the round nine Super Rugby match between the Force and the Cheetahs at nib Stadium on April 11, 2015 in Perth, Australia.

during the round nine Super Rugby match between the Force and the Cheetahs at nib Stadium on April 11, 2015 in Perth, Australia.

According to the Cheetahs’ CEO, Harold Verster, they could “explore other international competition opportunities,” while Andre Rademan, president of the EPRU, said, “…there is now a clear and viable way forward for rugby in the Eastern Cape to build on the foundations that have been laid.”

I think both of these suits have missed the point. And here’s why.

SANZAAR reduced the number of teams in the competition because the product has simply become rubbish. The Sunbambis – or whatever they’re called – have added nothing but complicated logistics and a chance to rack up a cricket score with your reserve team, while the Jaguares have been erratic.

Traveling to Argentina for one-off matches has also had its challenges for teams, but it’s fair to say at least the South Americans have given a moderate account of themselves, and the impact on their national team’s performances is noticeable. Yes, they beat the ‘Tahs in Sydney on Saturday, but that’s not exactly hard to do.

With all of the juggling that’s gone on by SANZAAR,  ditching two South African teams and one Australian team, they hope to have a more even contest and a competition based on greater strength-v-strength. This is a sound rationale and SA Rugby was only going to benefit from using the savings from funding fewer teams to prop up the remaining four.

Why the hell is SA Rugby allowing the jettisoned teams to go and frolick in the northern hemisphere, in adverse conditions, potentially traveling more often, away from SA for longer and at conflicting times to our season?

Surely the opportunity to consolidate the player groups would make more sense, by sifting out the guys who wouldn’t even be good enough to tie Malcolm Marx’s bootlaces? This would ensure less talent dilution and the Boks could be chosen from four strong teams.

Also, through some clever, strategic (cheeky, if you will) contracting, some national team combinations could effectively be mirrored, giving them more game time together. Take the Cheetahs’ Raymond Rhule for example – he could go to the Lions and link up with other back three players Courtnall Skosan, Andries Coetzee and Ruan Combrinck. Even the Aussies, who can’t decide who to flick, are going to do this!

And even if this player movement did happen, then the Cheetahs and Kings teams will simply be thrown to the wolves in the north; they’ll get spanked by the likes of Munster and the Ospreys week-on-week. Way to build confidence…

Rademan added that the chance to test themselves against different opposition in different conditions is “a mouth-watering one.”

Well, I hope he likes the taste of his own sick, because that is literally the dumbest idea I think I’ve heard in a while.