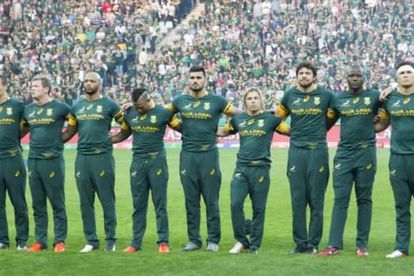 Springboks during The Rugby Championship match between South Africa and Argentina at Mbombela Stadium on 20 August 2016 in Nelspruit, South Africa. Photo by Dirk Kotze/Gallo Images.

Springboks during The Rugby Championship match between South Africa and Argentina at Mbombela Stadium on 20 August 2016 in Nelspruit, South Africa. Photo by Dirk Kotze/Gallo Images.

On 13th December, SARU President Mark Alexander stated this after a 2016 season review session SARU had conducted with 3 senior players and the Springbok coach, Allister Coetzee:

“This has been a period of introspection for SA Rugby with all of us looking at our role in a dreadful season. That process will continue into January as we examine the options at our disposal. We will act upon whatever interventions are identified as being necessary by all involved. I would expect that process to be completed before the end of January.”

“We’re not sure which way we’re going, whether we’re keeping Allister or not.”

And finally, on 3rd February, a further announcement from SARU:

“…all the work around the coach review process has been concluded, but the Union can’t make any comment on the process until all the contractual negotiations have been completed…which will happen as soon as possible.”

While I’m sure we can accept a minor delay, the fact of the matter is that SARU keeps pushing the goal posts out and it just smacks of indecision. Going from not being sure of what the decision will be to only 12 days later undergoing contract chat, one can only assume that no replacement (daft enough) could possibly have been sought in that time, and therefore this latest soundbite suggests that Coetzee will be safe from the axe.

All that us supporters want is a decision and not a protracted soap opera played out in public. Reading further into it, Coetzee has SARU by the short and curlies, which he has had since day one sans a performance clause; it would cost SARU a LOT of money and leave significant egg on their smug faces if they were to sack him.

We must also remember that he was appointed for “reasons other than rugby”, and firing him so soon will only put the politically-motivated individuals at SASCOC or the SA Sports Ministry’s noses out of joint that SARU hasn’t treated their guy nicely. Which is obviously complete nonsense as Coetzee’s domestic coaching record shouldn’t unfairly tag him with the “window dressing” label, even if your belief is that he wasn’t the right man for the top job.

But be that as it may, I can only presume that Marky Mark is teasing Toetie with a severance package half the full amount so that he can pave the way for the return of a prodigal son who is available for a gig… Jake “The Turnaround King” White.