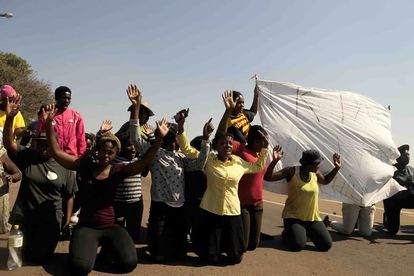 NORTH WEST, SOUTH AFRICA  AUGUST 31: Residents of Majakaneng near Brits embark on protests after the disappearance of 24-year-old Tebogo Ndlovu on August 31, 2017 in North West, South Africa. This mystery of Ndlovus disappearance has divided the town of Majakaneng, with rumours that he was shot dead by a farmer and others claiming he has fled to Mozambique. (Photo by Gallo Images / The Times / Masi Losi)

NORTH WEST, SOUTH AFRICA  AUGUST 31: Residents of Majakaneng near Brits embark on protests after the disappearance of 24-year-old Tebogo Ndlovu on August 31, 2017 in North West, South Africa. This mystery of Ndlovus disappearance has divided the town of Majakaneng, with rumours that he was shot dead by a farmer and others claiming he has fled to Mozambique. (Photo by Gallo Images / The Times / Masi Losi)

A post, written by Nigel Branken and shared to Facebook, asking for South Africans to consider the #BlackMonday protests in context has gone viral. It is published below in it’s entirety.

The last time somebody saw Tebogo Ndlovu was on 2 August 2017. Tebogo and two friends were on a farm in Mooinooi, North West Province, when he was shot in the leg by a farmer for apparently stealing a few oranges.

His two friends, fearing for their lives, helped Tebogo to flee, but had to leave him behind when they could not lift him over a fence. When they looked back they saw the person who shot Tebogo standing next to him. His mother went to the police to report the incident, but it was only after the Makajane community blocked the N4 highway, 20 days later, that the police started to take action.

It is alleged that the farmer’s son, Matthew Benson took Tebogo’s body and fed it to crocodiles on his crocodile farm to hide the evidence of his crimes. Police have found blood stains matching Tebogo’s blood and cartridges matching Benson’s 9mm pistol were found close to where the shooting took place. Further blood stains were found on Benson’s bakkie. Tebogo’s body has yet to be found.

If it had not been for the protest actions of this local community, shutting down the N4, it is unlikely that Tebogo’s murder or disappearance would have been investigated.
This incident does not stand alone, a similar incident happened earlier this year in Coligny, when farmers Pieter Doorewaard and Phillip Schutte were accused of killing Matlhomola Jonas Mosweu for allegedly stealing sunflowers. Then, just this week, we had the widely publicized case where Theo Jackson and Willem Oosthuizen were given various sentences for assault with intent to cause grievous bodily harm, intimidation and attempted murder for forcing Rethabile Mlotshwa into a coffin and threatening to set it alight. Over the years extensive evidence of atrocities committed against black workers on white-owned farms has consistently been uncovered.

It is into this context that I have been reflecting on the call by some white farmers and white South Africans for us to wear black on Monday to remember “farm murders” (and by “farm murders”, they refer to white farmers murdered). The irony of calling an event “black” Monday to commemorate “white pain” when the most common pain in reality remains “black pain” points to the agenda of the event organizers.

20 years into our democracy and we are as unequal as ever. Arrable farm land predominantly remains in the hands of white South Africans. Farm workers, who are almost exclusively black, remain some of the most exploited and vulnerable workers in our country. Parliament’s select committee on economic and business development recently visited farms in the Free State and found child labour practices on the farms, rotten meat being fed to workers while fresh meat was given to lions‚ and children of labourers, as young as three sleeping in unhealthy plastic stalls. Studies repeatedly show farm workers not able to provide adequate nutrition for their families. Racist and exploitative labour practices are rampant across the country.

It is into this context that a narrative has been created that there is an onslaught against white farmers and that they are the most vulnerable in South Africa. Despite Afriforum and others taking to social media to tell us of a so called “white-genocide” and new “swart-gevaar”; (black-danger), this allegation has been fact checked and repeatedly debunked. Yes there are white farmers who are victims of crime, and yes the murders are often brutal, but these are not the only murders and white farmers are not even the most likely to fall victim to violent crime. In addition, the pictures we are fed on our social media feed are anecdotal at best and often shared to stir up racially based fear and create a false narrative. Sometimes the pictures we see are not even of farm murders. Just last month, a right winger posted pictures on my Facebook feed of a Charles Manson murder claiming it was a farm attack.

Despite there being a higher incidence of farm murders on white farmers than murders in the general population, black South Africa’s are still more likely to fall victim to violent crime in South Africa. On Monday, some farmers are telling us to all stop and be concerned about a certain small group of victims … white victims…

If South Africa is going to move forward in any way, Tebogo Ndlovu’s life must matter too. Dignity on the farms for all farm workers must matter more than it does now. The true measure of our ability to value humanity is not measured in how we protect the most privileged citizens but in the efforts we make to defend the rights of the most vulnerable.

I will not be wearing black on Monday, not because I don’t have compassion for white farmers, but because I stand with all living and working on farms and with all victims of the greatest source of violence in South Africa… the violence of racism.

The main questions I will continue discussing with my family and friends on Monday remain…
– how we build a new South Africa free from the scourge of our racist past?
– What role do I play in this as a white privileged South African?
– How can my life be a sign of hope that a different South Africa, an equal South Africa, a just South Africa is possible?

South Africa will not live in peace until we find a way to practice justice.