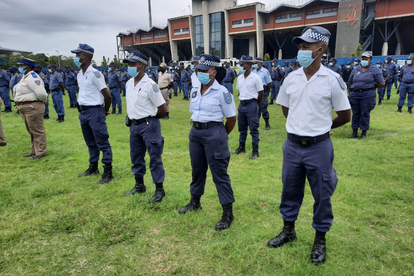 Three policemen allegedly scored a bribe fee in Upington but did not expect the victim to turn to run to the police station to tell on them.

According to the report, the three cops have been charged with extortion and theft. The incident followed after the men in blue searched a suspected drug house in Paballelo, Upington.

The three cops carried out a drug search that did not bear any fruit at the victim’s house. They then made an unlawful arrest, drove away with the victim before they allegedly demanded R4 000 to release him.

The victim provided the bribe fee while his cellphone was also taken away from him.

“The police officials took the complainant in the police vehicle without any lawful arrest and demanded money from him whilst driving around the area,” said NPA spokesperson in the Northern Cape, Mojalefa Senokoatsane.

What followed next was unexpected from the cops’ side and might be life-changing forever.

The victim went to go lay a complaint at the local police station.

Following the victims’ complaint, which must have surely sent shockwaves around the station, the suspected policemen were arrested for scoring the bribe fee. Additionally, the victim, who obviously turned out to be the wrong guy to demand a bribe from, was returned his money.

“The trio appeared in the Upington District Court and the case has been remanded to March 14, as the Independent Police Investigative Directorate and SAPS are investigating further,” Senokoatsane said.