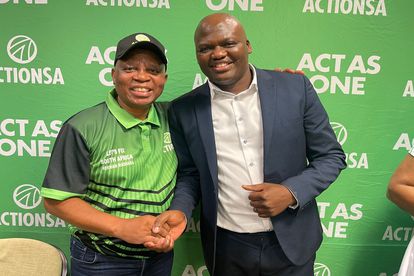 Mncwango was unveiled to the public as the new ActionSA KZN Provincial Chairperson on Monday, 17 October 2022 in Durban.

Zwakele Mncwango who recently quit as a Member of the Provincial Legislature where he was the party’s Chief Whip is joining ActionSA. Just days after quitting as MPL Mncwango announced his resignation as a member of the DA. Rumours were already doing the rounds that he is likely to take over Dr Makhosi Khoza’s former position.

Speaking at the media briefing, Mncwango who was born and bred in Nongoma said he joined ActionSA because he wants to fix South Africa.

“While I had many options it became clear for me that the mission was not complete yet and I had to continue with politics and really play my part. I also have an assignment to serve the people of South Africa, more especially the people of KwaZulu-Natal,” he said.

Mncwango said after much reflection he strongly believes that the policies and values of ActionSA are aligned to his personal ones.

“Social justice is close to my heart, we need a pro-poor agenda, we can’t play around that. We need to start engaging on this issue  to say how do we help our people in the country because it is not use to enjoy the luxury life while you pass many poverty-stricken areas where people are starving. The question is how do we take those people along with us?”

Furthermore, the new KZN Provincial Chairperson said he sees a need for politicians to be screened first saying hitmen cannot be leaders in South Africa (considering that KZN is well-known for political killings).

Mncwango said it is embarrassing at times to find politicians failing to engage with reports either in Parliament or in councils because they do not understand what is in the report. He added that it is important for political parties to start sending people who can add value in Parliament and not just numbers.