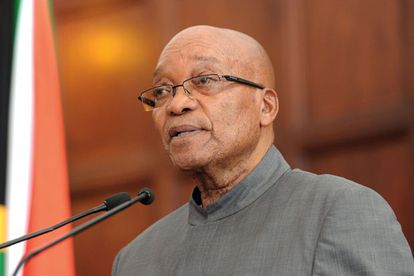 President Jacob Zuma,on the occasion of the presentation of letters of Credence by new Heads of Mission accredited to South africa at Sefako Makgatho Presidential Guest House,Pretoria.06/03/2014.Sbongile Ngalwa.GCIS

President Jacob Zuma,on the occasion of the presentation of letters of Credence by new Heads of Mission accredited to South africa at Sefako Makgatho Presidential Guest House,Pretoria.06/03/2014.Sbongile Ngalwa.GCIS

Responding to a parliamentary question regarding South Africa’s policy towards Uganda’s recently-enacted law, the ANC leader said: â€œSouth Africa respects the sovereign rights of other countries to adopt their own legislation.”

He added: â€œIn this regard, through diplomatic channels South Africa engages with Uganda on areas of mutual concern bearing in mind Uganda’s sovereignty.”

In an election debate at Johannesburg City Hall on Wednesday, the ANC’s Thoko Didiza said: â€œUganda as a country has gone through its legislative framework and came up with the legislation they have. Obviously there are mechanisms around which countries persuade each other in order to appraise each other of things they are concerned about.”

Democratic Alliance parliamentary leader Lindiwe Mazibuko was â€œoutraged” by Zuma’s response to her question, saying that the worldwide community did not take a â€œhands-off” approach to apartheid in South Africa.

She said: â€œWe should likewise not stand quietly by as our president adopts this shameful approach when other countries violate the human rights of their people. To do so is to send a message to the rest of the world that we are hypocrites.”

Mazibuko described Zuma’s respect for Uganda as an insult to the constitution and Nelson Mandela’s views on human rights.

In February, the South African Human Rights Commission (SAHRC) called upon Zuma and his government to condemn Uganda for this law.

SAHRC spokesman Isaac Mangena said: â€œOur government is rightfully expected, and needs to speak out against all laws that seek to discriminate against and violate the rights of vulnerable and marginalised groups.”

They are concerned that the law could even put South Africans travelling or working in Uganda at risk.

The Commission also pointed out that, in 2011, South Africa actually initiated a resolution at the UN Human Rights Council in support of gay rights.

Western nations took action against Uganda, with Norway and Denmark withholding aid, the USA reviewing their aid budget and the UK channelling its aid through appropriate routes.

Citizens are also now required to denounce gay people to the authorities.

Zuma has made anti-gay remarks in the past, including in 2006 as deputy president when he said: “When I was growing up, an ungqingili [gay person] would not have stood in front of me. I would knock him out.”