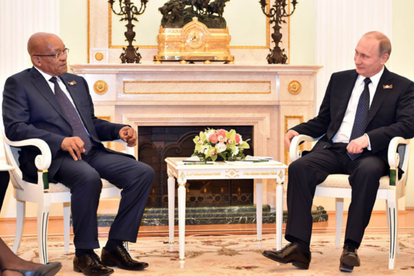 Former president Jacob Zuma has gone public with somewhat controversial comments on the conflict between Russia and Ukraine.

In a statement issued by the Jacob Zuma Foundation on Sunday evening, the ex-president voiced pro-Russian sentiments. In his opinion, Russia had been justified in taking action against the Ukraine. This, explained Zuma, was due to the democratic nation joining NATO.

“His Excellency President Vladimir Putin has been very patient with the western forces. He has been crystal clear about his opposition of the eastern expansion of NATO into Ukraine, among other areas, and is on record about the military threat posed to Russia by the presence of these forces, if allowed to be on his door-step.”

Furthermore, Zuma questioned why NATO forces were allowed to ‘establish presence’ in the Ukraine.

“Surely, in terms of efforts to achieving world peace, the sovereignty of Ukraine and all the democratic dictates cannot mean allowing NATO to establish presence on its real estate, thus, establishing an untenable security risk to Russia. Ukraine and Russia are separated only by a line on the map and not by the Baltic Sea- Why is this complicated to understand?”

Furthermore, Zuma called on Ukraine to stop ‘pandering’ to the West and place the interests of its people first.

“”We call on President Zelensky to put the interests of the Ukrainians first, instead of pandering to his western allies at the expense of innocent lives.”

In conclusion, the statement directly quoted Zuma as ‘hopeful that the initiatives to have peace talks between the two countries will succeed’.

“I am certain that His Excellency President Vladimir Putin will reciprocate and will bring all in his power to make peace a reality, as I know him to be a man of peace who has worked hard to ensure peace and stability in the globe.”