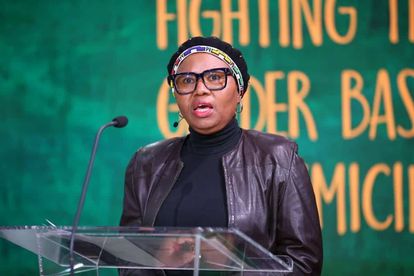 There is a correlation between alcohol abuse and gender-based violence, Social Development Minister Lindiwe Zulu has said.

Zulu was speaking during a webinar session on the commemoration of the International Day Against Drug Abuse and Illicit Trafficking in Pretoria.

“It is a global problem that requires global cooperation. The high levels of alcohol and drug abuse, and in more recent times, the emergence of cheap and easily accessible drugs like nyaope and whoonga has reached epidemic proportions”, Zulu said.

“No part of our society has been spared this scourge of alcohol and substance abuse. Alcohol, tobacco and illicit drug use remain a significant issue in our community, contributing to the burden of disease in South Africa”

The minister said a national concerted effort is needed to realise the vision of a country free of alcohol and drug abuse.

“Along with the emergence of greater availability and trafficking of these cheap highly addictive drugs, we must also confront the emerging crisis of intravenous drug use which is driving the new HIV infections and hepatitis”, she said.

Join the fight against GBV

Zulu has further called on the nation to come together and fight the scourge of abuse levelled against women and children.

“I implore all South Africans wherever you are, whatever language you speak, whatever your religious persuasion and whatever your political affiliation, let us join hands together to fight this evil scourge that is tearing our nation apart”, she said.

“This is the time for all of us to pull together to ensure that all women and girls of this great nation are and feel safe. We must confront head on this culture of violence perpetrated against women and girls and deny them their inherent human rights and dignity because of their gender”

The minister fittingly touched on the National Drug Master Plan – a government initiative aimed at ridding the nation of substance abuse.

Zulu said the plan reflected a coordinated multi-sectoral approach and provides strategic direction necessary to prevent and reduce the scourge of alcohol and substance, provides treatment for substance users and reduce the availability of dangerous drugs in the country.

“The goal of the of the National Drug Master Plan is to contribute to safer and healthier communities through coordinated efforts to prevent use, treat substance use disorders, and reduce production and distribution of illicit drugs in South Africa,” the Minister said.