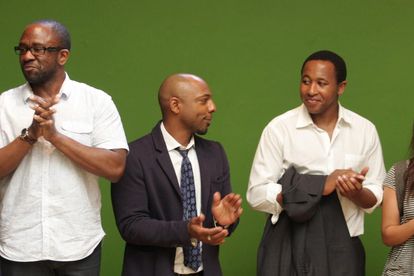 Tiata Fahodzi in association with The Tricycle Theatre present ‘The epic adventure of Nhamo the Manyika Warrior and his sexy wife Chipo, written by Denton Chikura. Cast and crew came together for the launch event last week to mark the start of rehearsals. The play will run from 1 – 17 August at The Tricycle Theatre.

Zimbabwean actor Lucian Msamati (The No1 Ladies’ Detective Agency) who is currently performing at The National Theatre in The Amen Corner alongside Marianne Jean-Baptiste (Without a Trace), will be making his directorial debut with this production which he describes as a â€œSouthern African type of comedy that doesn’t do subtlety, that wears its wit very openly, lightly and joyously.”

African storytelling and theatrical decorum are turned on their heads in this new comedy. A desperate narrator has just 24 hours to create the ultimate African fable. The superstar cast is ready, but they are missing a hero. Suddenly, a dashing goatherd appears on the horizon…Nhamo. Is he The One?

The epic adventure of Nhamo the Manyika Warrior and his sexy wife Chipo is a mouthful of a theatrical title, in itself a nod to the traditional practice of oral storytelling in Southern Africa. â€œIt’s about story-telling,” says Msamati, â€œIt’s about show business. It’s about people’s perceptions. And the political comments it makes are poignant.”

Nhamo the Manyika Warrior â€œis proper, good, joyous, rip-roaring comic theatre with a special heart to it,” Says Lucian, â€œThis might be slightly controversial, but it doesn’t take itself very seriously, it’s a bit frivolous even. The audience will, I hope, appreciate the very obvious wink and nudge to now. It’s self-referential, every bit a 21 century piece.”

Nhamo the Manyika Warrior is a play close to Msamati’s heart because of his own Zimbabwean roots. Under his artistic directorship, Tiata Fahodzi (Theatre of the Emancipated), has become a leading British African Theatre company since its foundation in 1997. The company aims to create world-class theatre reflecting the cultural experiences of Africans. Nhamo the Manyika Warrior will be co-produced with The Tricycle Theatre.

Addressing the guests at the launch, Indhu Rubasingham, artistic director of The Tricycle Theatre, endorsed Msamati’s passion for the production, â€œThis is the kind of play this theatre is meant for.”

The world premiere of The epic adventure of Nhamo the Manyika Warrior and his sexy wife Chipo will run from 1-17 August at The Tricycle Theatre, Willesden.