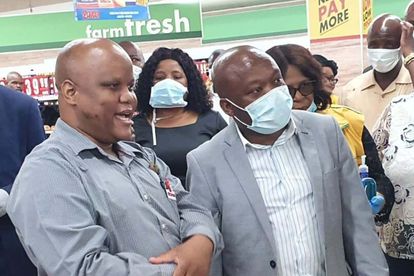 KwaZulu-Natal Premier Sihle Zikalala has conveyed his condolences to the family of South Africa’s second patient who succumbed to the coronavirus.

The 74-year-old man from Ladysmith in the north of the province was confirmed to have died on Sunday 29 March.

He is believed to have had skin cancer which complicated the symptoms of the virus.

Speaking in Port Shepstone where Zikakala is monitoring the payout points for social grants, he said that the disease was severe and people should not take it lightly.

“We want to caution our people that this disease is very strong and we need to prevent and avoid being infected. It is not just the normal flu.”

“We send our sincere condolences to the man’s family,” he said.”

He also addressed KZN healthcare worker’s concerns that there is not enough medical supply filtering through to them as they desperately try to contain the spread of the virus.

“The supplies are going to arrive and we are ensuring that all hospitals are equipped,” he said.

The country’s second death was confirmed on Sunday evening, with Health Minister Zweli Mkhize saying that the man had returned from the Kruger National Park.

“It is with sadness that we announce the second death of a patient who had tested positive for COVID-19. The 74-year-old male had been in ICU and ventilation in a private hospital in Ladysmith.

“He had travelled to the Kruger National Park with his family and came back with flu-like symptoms,” Mkhize said in a statement.

“He was confirmed to be COVID-19 positive on 27 March 2020. It has been reported to us that the deceased patient had an underlying skin cancer condition (melanoma), which had already complicated.

“He presented with the following symptoms: Respiratory distress, shortness of breath, cardiac failure, decreased saturation and his temperature was above 38 degrees.”

The town of Port Shepstone was seemingly going about business as usual on Monday morning, with hundreds of people seen meandering around the long queues of elderly people awaiting to claim their advanced payment of their social grants.