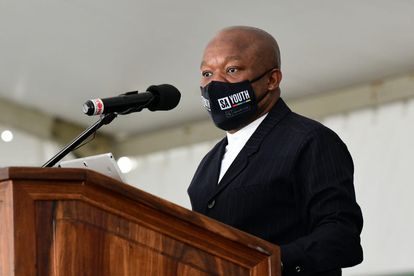 KwaZulu-Natal Premier Sihle Zikalala has condemned the violent killing of people in the LGBTQIA+ community during his Youth Day speech in Umsunduzi local municipality on Wedneday.

Zikalala, addressing delegates, including President Cyril Ramaphosa and other cabinet members, at a Youth Day commemoration event at Harry Gwala Athletics Stadium, said that the government condemned the killings in the strongest terms.

“We condemn in strongest terms the violence and violence perpetrated to any section of the society, including the attack and killing of members of the LGBTQIA+,” Zikalala said.

“The killing of 21 year old Anele Bhengu from KwaMakhutha is one tragic incident which portrays the depth of discrimination and the pervasiveness of hate crimes. We call on law enforcement organs to ensure that the perpetrators are swiftly brought to book.”

Remembering the historical significance of the June 1976 youth and student uprising, Zikalala said the fight against the use of Afrikaans as a medium of instruction had became an assault to racial domination, complete marginalisation and disenfranchisement of the masses.

“We owe it to the militant and heroic June 76 generation to pay forward their sacrifices by sparing neither strength nor courage in creating a South Africa which is truly united, non-racial, non-sexist, equal, and prosperous,” Zikalala said.

He said the government noted “with disappointment” the recent incidents of racial intolerance at some schools. “We make a solemn vow again on this 45th Anniversary of June 16 that we will leave no stone unturned to achieve the society which the June 16 MK Detachment and many of our people sacrificed for,” Zikalala said.

“Celebrating youth day here reminds us of young cadres who led the youth struggle from iMbali Youth Organisation, to South African Youth Congress and ANC Youth League. We remember Isaiah Ntshangase, Mzwandile Mbongwa, Stitch Ngubane and many others like the 1976 generation which chose to surrender itself in the cause of freedom, and thereby declared that life or death, victory is certain.”

He said the government had invested in the goal of achieving universal access to education, including grade R, and increasing access for black students at institutions of higher learning.

“In six years, the National Student Financial Aid Scheme (NSFAS) was augmented more than five times. As we know, it was R5.9 billion in 2014, and increased to R34,7 billion in 2020. In 2021/2022, NSFAS funding will exceed R43 billion.  This year, more than R26 million from the KZN Premier’s Discretionary Bursary Fund is supporting no less than 170 students across tertiary institutions in South Africa,” Zikalala said.

He added that KZN had established a “War Room on Jobs”.

“We have insisted that youth employment must be mainstreamed by all departments. We will continue to engage the private sector to fulfil the commitments they have made towards job creation.  In the last financial year, we exceeded our target of 100 000 job opportunities and achieved 137 000,” he said.