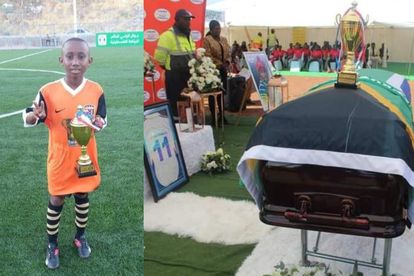 Kabelo Masalesa, the young player who drowned in a swimming pool in Palestine, was laid to rest.

KB, as he was affectionately known, was laid to rest at his home village of De Vrede outside Senwabarwana yesterday, Saturday, 30 July.

The 11-year-old young player was one of six young soccer stars who jetted to Palestine for a three-phased tournament called Free Palestine Football tournament, which is part of the Palestinian embassy’s participation in youth development programmes to uplift the youth of South Africa.

Unfortunately, he accidentally drowned in a swimming pool on Saturday night, 17 July and his body was discovered the next day (Sunday).

Kabelo Masalesa’s body was repatriated to South Africa last week. The repatriation procedure was done with dignity and respect and was attended by the President of Palestine Mahmoud Abbas.

THE OBITUARY OF THE LATE YOUNG STAR

Born in 2011, his schooling journey began in 2014 at Affordable Pre-school in Bramley.
He was a Grade 5 learner at Orchard Primary School at the time of his death.
In 2019 he joined Black Poison Football Club and was selected to represent Gauteng Under 13 squad in Cape Town early this year, and then selected to represent South Africa in Palestine where he, unfortunately, drowned during a football tour.

“The embassy sends prayers, comfort and strength to the Masalesa family during this heart-breaking time.
Kabelo will forever remain in our hearts, may his young soul rest in peace”.

Embassy of the State of Palestine/ South Africa