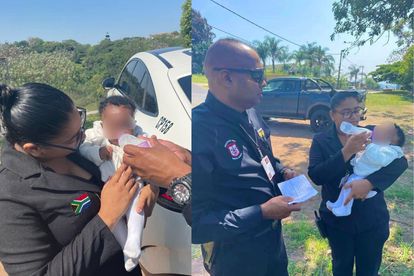 The mother who dumped her three-month-old baby girl with an APOLOGY note earlier this week was arrested for child abandonment.

THE YOUNG MOTHER DUMPED THE BABY WITH AN APOLOGY NOTE

“Reaction Unit South Africa (RUSA) was called out to Oaklands Drive in Dawncrest – KZN on Monday after a mango picker found a baby alongside a stream. Reaction Officers responded and called in Paramedics. The three-month-old girl was examined and found to be in good health.”

He said a female officer changed and fed the crying baby with a bottle and diaper sent to the scene from the RUSA Headquarters.

“An apology note found in the bag requested that authorities be called in and that the system had failed her when she attempted an abortion. She also asked not to be judged. No further details of the baby or the father were found on the note written in English.”

Balram said the woman was arrested after she willingly handed herself over to the South Africa Police Services (SAPS) after a public outcry on social media platforms in South Africa.

THE YOUNG MOTHER WILLINGLY HANDED HERSELF OVER TO SAPS

“The mother was charged, and she appeared in the Verulam Magistrates Court today. She was granted bail of R500.”

The organisation knewew that something needed to be done.

“In 1999 the Berea Baptist Mission Church said, “something needs to be done”. Under the leadership of Pastor Cheryl Allen, the church made a hole in their wall and a ‘Baby Box’ was installed allowing for mothers to leave their babies any time day or night for the church to take care of them.”

The Department of Social Development (DSD) spokesperson Joshua Chigome, told the media it was a crime for parents, legal guardians, or caregivers to desert a child for no reason.

“While this is a growing problem, few know that it is a crime for a parent, legal guardian, or caregiver to desert a child for no reason without any contact for three months. Of course, the law is supposed to protect the rights of children, and there are legal consequences for anyone who is found guilty of abandoning a child,” he said.