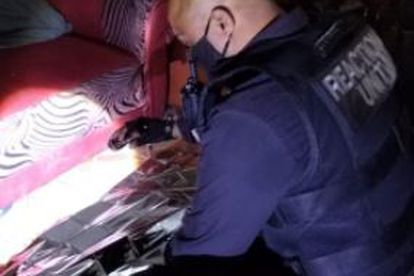 Young KZN mother was EXECUTED in front of her small children on Wednesday. Photo: RUSA

Young KZN mother was EXECUTED in front of her small children on Wednesday. Photo: RUSA

A young KZN mother was executed in front of her two children and other family members during a robbery on Wednesday evening.

The robbery took place at their home in Ntombe opposite Trenance Park in Verulam.

Reaction Unit South Africa (RUSA) spokesperson Prem Balram said they received a call for assistance from a neighbour at 19:44 after one of the children sought refuge at their house.

“Reaction Officers and RUSA paramedics were immediately dispatched and, on arrival, located young KZN mother’s lifeless body in her living room. She sustained a gunshot wound to the back of her head and her left leg.”

He said, according to her family, two armed suspects stormed into the house and demanded that they lay on the ground.

They were asked to hand over their cellphones.

“One of the suspects was heard questioning the young mother as to why she turned and looked at him before he shot her twice. The robbers then fled with seven cellphones,” Balram said.

He said the young mother (30) was executed in the presence of her three-year-old daughter, eight-year-old son, four-year-old niece, and six other members of her family.

According to residents, the getaway vehicle was either a black BMW or a maroon VW Jetta (registration unknown).

Meanwhile, earlier on Wednesday, five people and a five-year-old girl were accosted by a gang of robbers at their home on Juniper Road in Trenance Park.

“The suspects gained entry onto the property over the rear boundary wall and entered the house through an unlocked security gate. The robbers accosted four adults and forced them to the upper level of the home, where they confronted the fifth adult and the child.”

Balram said the victims were forced to lay on the ground while the thieves ransacked the house in search of valuables.

AN ELDERLY WOMAN WAS SLAPPED AROUND BY ROBBERS

Three of the men were armed with firearms. They fled with cash, jewellery, six cellphones, and a Hisense TV.

“A 71-year female was slapped after she asked the suspects to stop pistol-whipping her son-in-law.”

Balram said residents in the area informed Reaction Officers, who arrived on the scene at 13:54, that a gold vehicle was seen speeding off after the home invasion.

The gang is believed to be linked to several other home invasions and business robberies that have occurred in Verulam, KZN, in recent weeks.

The public is urged to be vigilant and contact Reaction Unit South Africa (RUSA) on 086 1234 333 should they spot a champagne Toyota Etios (registration unknown) hatchback with five or six occupants in their area.