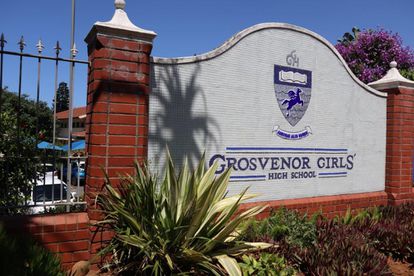 The principal of KZN school Grosvenor Girls’ High School, Linda Jorgensen, has been placed on precautionary suspension after she allegedly called learners ‘monkeys’.

INVESTIGATION UNDERWAY BY DEPARTMENT OF EDUCATION

The angry learners took to the streets outside the Grosvenor Girls’ High School in February to protest against a school that allegedly treats black and coloured girls unfairly. They alleged that racism was an ongoing issue at the school.

Parents shortly followed suit and joined their children who demanded change as well as the removal of the principal.

However, they were reassured that they could voice their opinions and experiences.

An independent panel was established to guide the KZN education department on the matter.

Muzi Mahlambi, the spokesperson for the KZN Department of Education, said the suspension decision was made following their recommendation.

The eThekwini Region of the Economic Freedom Fighters has had Jorgensen in their crosshairs since last week and fired shot at her for calling learners “monkeys”.

Additionally, Mvuba called out another staff member who was only identified as Mrs Arlow.

Themba Mvuba, the chairperson of the branch, said the battalion of red berets would descend on the school should both Jorgensen and Arlow not.

“We will report the matter to the human rights commission,” said Mvuba.

However, as of Tuesday, there had been no action taken by the EFF as threatened although only Jorgensen was suspended. On 01 March the EFF were removed from the school after they mobilised in defence of the students.