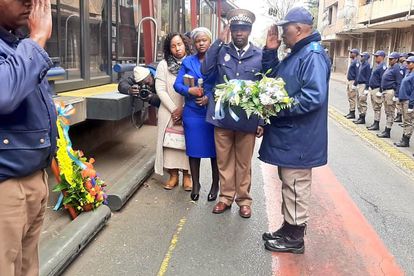 The Johannesburg Metro Police Department (JMPD) held a wreath-laying ceremony in honour of its late officer.

The ceremony was held on Thursday, 4 August in the vicinity of the shooting.

Acting Chief of Police Maxwell Khanyile together with MMC R Harris and staff assembled at Wolmarans and Claim Streets in JHB to honour the late officer Vongani Hlungwani who dedicated his life and passed on whilst serving the City.

Hlungwani was part of the JMPD Operations officers assigned to the Buya Mthetho block patrol Undercover Unit who were working on information received of suspects involved in multiple robberies in the Johannesburg Inner City.

HOW THE OFFICER WAS INJURED ON DUTY

Whilst conducting foot patrols in Joubert Park officers spotted five suspicious males coming out of a shop at Claim Street. Officers followed the males as they turned right into Wolmarans Street.

“Emergency Services were called to the scene and officer Hlungwane was rushed to Garden City Hospital. Unfortunately, he succumbed to his injuries and he was declared deceased at the hospital,”

He added that said a murder and inquest docket was opened at Hillbrow SAPS and any persons who might have witnessed this incident are requested to call JMPD on 011 375 5911 or SAPS hotline: 0800 10111.