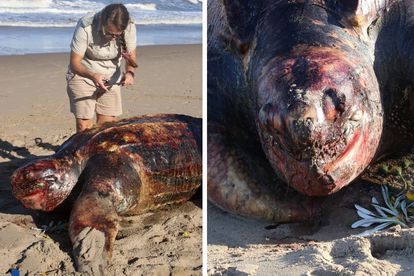 THE GIANT LEATHERBACK SEA TURTLE IS COMMON IN MOZAMBIQUE

According to the Mpenjati Conservancy, this female leatherback sea turtle was found washed up on Trafalgar Marine Reserve beach.

“They are not usually found this far south as they are more common in tropical Moçambique and further north.

“It is presumed that her body was probably brought up onto the beach during Monday night’s high tide.”

It furthermore said the turtle’s cause of death is unknown, but as she was tagged, it won’t be long until they have a better idea of her age and journey.

SHE WAS BURIED ON SIGHT UNDER PROTOCOLS OF MARINE PROTECTED AREA

Dr. Yvette Ehlers Smith, District Ecologist for Ezemvelo, KZN Wildlife, and her husband David, a research fellow at UKZN were on the scene to take her measurements (1,660 x 1,230mm) and samples for testing.

“Once this was finalised, the task at hand was to bury her. Digging a hole of that size is no easy task, but it becomes a lot easier when you have many people to assist.”

Members of the Joubert family, Belinda, and Dion, with sons Gridion and Etienne jumped in and helped with the digging, and three Mpenjati Reserve staff members, the Officer In Charge Njabulo Mavundla, Dr. Yvette and Anna Jordan from Mpenjati Conservation.

ALSO READ: Warning: Do NOT eat any fish or shellfish washed ashore in the Red Tide

“Men, women, and children all got stuck in to complete the job. Then she was gently rolled into her resting place and covered over.”

According to the Mpenjati Conservancy, this turtle was buried on sight by Ezemvelo under the protocols of a marine protected area (MPA).

Did you know that a Leatherback turtle gets its name from its unique shell, which is composed of a layer of thin, tough, rubbery skin, strengthened by thousands of tiny bone plates that make it look “leathery?”

Leatherbacks are one of the more endangered creatures on Earth. They are often caught by accident in fishing nets. Stuck underwater, they drown. Sea turtle nesting habitats are also being destroyed, and the eggs they do lay are illegally collected by people for food.