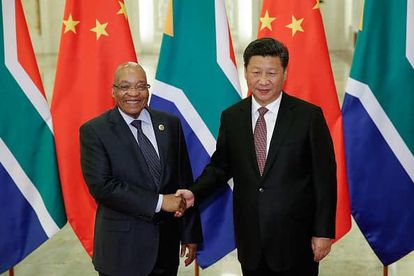 In my head, I’m picturing a scene from Mean Girls  Our Jacob goes to sit with a group of high-power figures in the conference cafeteria, only to be told: “You can’t sit with us!”

He’s got himself safely to Hamburg to take his seat at the top table with 18 other countries and the European Union… Who have definitely told Britain that they can’t sit with them.

On the agenda for this year’s summit is employment, world economy and strengthening financial architecture. You know. JZ’s strong points…

The discussions over global economic policies will also look at dealing with terrorism and extremism, climate and energy, and female empowerment: In fact, he has brought female ministers Maite Nkoana-Mashabane and Nkhensani Kubayi along as part of his delegation.

Having seven wives of his own, Zuma is the perfect candidate to talk about the advancement of women and their role in the 21st century.

Watch: Zuma embarrasses himself – and the rest of us – on TV at the G20 summit

Like a child invited to dine at the adult table, the president was very excited to be part of the talks, and promised to outline his vision for South Africa’s global contribution:

“South Africa’s participation will be guided by key pillars which include promoting world peace and a just global economic order, promoting Africa’s sustainable development through global partnerships, advocating the transformation of international institutions and promoting cooperation with other developing countries through strengthening South-South and North-South co-operation”

The G20 brings together the major advanced economies of the world that account for roughly 85% of the world’s population. Their aim is to create single policy frameworks that all members can adhere to, to promote global stability.

Let’s hope Zuma brings a pen and paper, and a set of ears that are willing to listen. Hope is, of course, the operative word.