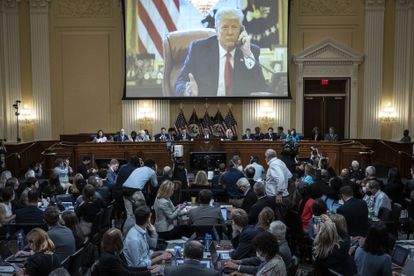 An image of former President Donald Trump is displayed during the third hearing of the US House Select Committee to Investigate the 6 January Attack on the US Capitol, on Capitol Hill in Washington, DC, on 16 June, 2022. Photo: Drew Angerer / POOL / AFP

An image of former President Donald Trump is displayed during the third hearing of the US House Select Committee to Investigate the 6 January Attack on the US Capitol, on Capitol Hill in Washington, DC, on 16 June, 2022. Photo: Drew Angerer / POOL / AFP

YouTube on Friday pulled a video posted by the congressional committee probing last year’s attack on the US Capitol because it contained election misinformation spread by then president Donald Trump.

“Our election integrity policy prohibits content advancing false claims that widespread fraud, errors or glitches changed the outcome of the 2020 US presidential election, if it does not provide sufficient context,”

“We enforce our policies equally for everyone, and have removed the video uploaded by the January 6th Committee channel.”

The committee, which is in the middle of a series of public hearings investigating the attack on the seat of US government on 6 January, 2021 in a bid to overturn the presidential election results in Trump’s favor, did not immediately respond to a request for comment.

YouTube did not specify which video was taken down at the channel, but media reports indicated the nixed clip contained Trump making baseless claims challenging the integrity of the election.

Trump pressured his vice president Mike Pence to go along with an illegal plot to overturn the 2020 US election and whipped up a mob that put his deputy’s life in danger when he refused, congressional investigators and former administration aides said Thursday.

The committee probing the attack detailed how the former president berated Pence for not going along with the scheme both knew to be unlawful — even after being told violence had erupted as Congress was meeting to certify Democrat Joe Biden’s victory.

At its third public hearing into the insurrection, the panel detailed a “relentless” pressure campaign by Trump on Pence — as cornerstone of a criminal conspiracy to keep the defeated president in power.

The committee maintains that Trump’s pursuit of this scheme led to the violence at the Capitol, which was linked to at least five deaths.