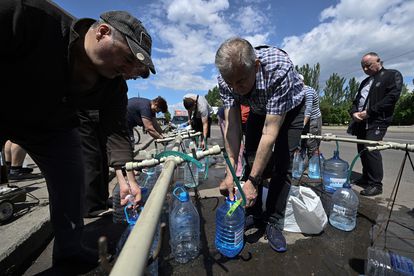 Residents collect drinking water from a supply truck in the southern Ukrainian city of Mykolaiv on 24 May, 2022, amid the Russian invasion of Ukraine. Photo: Genya SAVILOV / AFP

Residents collect drinking water from a supply truck in the southern Ukrainian city of Mykolaiv on 24 May, 2022, amid the Russian invasion of Ukraine. Photo: Genya SAVILOV / AFP

As the sound of artillery rumbles in the distance and the occasional air raid siren wails, Anna Bondar waits her turn to fill up on drinking water in Mykolaiv, a port city in southern Ukraine.

With her husband bedridden, the 79-year-old spends two to three hours a day hauling water back to her home.

And such trips are only likely to get more exhausting as late spring turns to summer.

Since fighting along the southern front severed a pipeline in April, cutting tap water to many areas, residents have spent weeks walking around the city to find water trucks, some getting around by bike and others driving.

Water shortages are just the latest in a string of hardships now woven into the fabric of daily life following the Russian invasion.

Here, as in other areas of Ukraine, cars can queue up for hours waiting for fuel with Russian attacks on refineries and storage facilities battering supplies across the country.

Many shops remain shuttered, businesses are closed, and schools have moved online with millions displaced in the past three months.

The demands of life during wartime are exhausting.

“I have a family of four. Can you imagine how much water we need to wash, to cook food, to make some tea?”

asks Valeriy Baryshev, a 27-year-old baker, as he straps jugs of drinking water to the back of his bike.

“I have to fetch some 120 litres per day,” he says, which includes what he needs for his bakery.

Military officials say it could be at least another month or maybe more before the city gets back regular access to tap water.

“We are trying to solve the issue,” Captain Lieutenant Dmytro Pletenchuk from the Mykolaiv regional military administration told AFP.

“This is a time-consuming process that involves solving many technical issues, drilling wells, organising work and cleaning the water.”

Until then, residents will be forced to forage or buy bottled water, a big expense for those unable to work because of the war.

“Sometimes I come here every other day, sometimes twice a day,”

“It’s daunting, both morally and physically. Thank God I can carry about 20 litres. But when my back hurts, I can’t even take a five-litre bottle.”

“Thank God I am not scared of heat. My body is used to it,”

ALSO READ: In a village near Kharkiv, life under constant shelling

And while he wasn’t expecting to be hauling water at his advanced age, the shock of seeing troops pour across the border into Ukraine was unfathomable for the native Russian.

“It makes me very sad,” he told AFP, reminiscing about the frequent trips he and his wife use to take back home to see family and friends.

“We would help our parents, look after their garden and help with some repairs,”

“Now we can’t even go there to tend to their graves.”