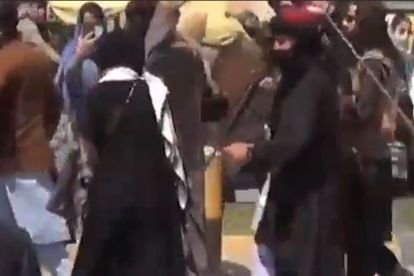 It’s one of the countless scenes that have come from Afghanistan following the Taliban’s sudden takeover: A number of women being whipped by members of the terror group just recently.

The women have been hailed for their bravery as they took to the streets to voice their anger over Taliban rule and for lack of representation in the all-male interim government that was announced just recently.

They have been demonstrating since the Taliban took over and the group has come under immense fire over its response – using force, particularly beating the women with whips and batons. Sometimes the situations have turned deadly.

The government has declared that participating in and covering protests is illegal without their permission.

It has emerged that women aren’t the only ones under siege in Afghanistan: Human Rights Watch has said that journalists have also been targeted. Two of them have been detained and beaten.  Taqi Daryabi and Nemat Naqdi, from the Kabul-based media outlet Etilaat Roz had been covering the protests by women.

“Two of my colleagues from who were detained by Taliban, beaten for four hours. Under constant and brutal torture of the Taliban, the reporters lost their consciousness four times. This is unacceptable. We want the Taliban to bring their soldiers to justice. We also all the media organisations stand together against this unacceptable torture,” their editor Zaki Daryabi said to Sky News.

Since seizing control of the capital Kabul on 15 August, the Taliban has maintained that women’s rights will not be violated and they will be allowed to go to school – a far cry from how things were when they were last in power.

However many in the international community remain skeptical – the group has asked all women, apart from those in the public health sector, to stay away from work, until the security situation in the country improves.