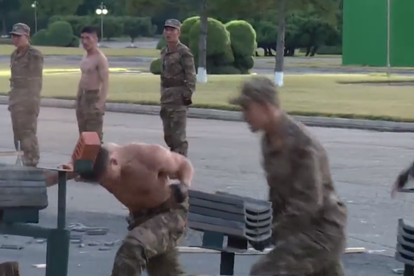 Whatever you do, don’t get on the wrong side of these guys. These incredibly tough soldiers from North Korea have displayed just how committed to the national cause they are, after they put on a jaw-dropping show in Pyongyang.

The scene was part of a pain-defying drill put on by the North Korean army, for the opening of a defence exhibition this week that showcased the nuclear-armed country’s weapons. The soldiers – some in uniform, others topless – punched their way through layers of concrete bricks, or broke them with their heads.

Others were hammered on their arm or hand, and one lay on a bed of nails to have a block broken on his chest. Leader Kim looked on clapping and smiling, surrounded by officers and with his sister and close adviser Kim Yo Jong at his side, footage on state broadcaster KCTV showed Tuesday.

Somewhat comically, the over-enthusiastic newsreader said the soldiers’ strength was “bestowed upon them by the dear leader, Kim Jong Un” – and the personality cult remains as strong as ever in the hermit kingdom…

The arms exhibition – at which Kim blamed the United States for tensions on the peninsula and accused the South of hypocrisy – is part of the commemorations for the anniversary of the foundation of the ruling Workers’ Party.

The brutal, totalitarian state is known for its abysmal human rights record and heavy military focus. However, a recent UN report claimed that ‘a mass starvation event’ is set to impact North Korea, due to a dismal harvest season. This would mirror the tragic famine that crippled the country throughout the 1990s.