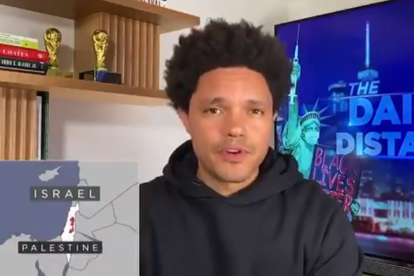 It’s a contentious topic that can prove to be a minefield for TV A-listers like Trevor Noah. However, the Soweto-born superstar has jumped in head-first to the ongoing conflict between Israel and Palestine.

Trevor Noah asks if Israel-Palestine ‘is a fair fight’

He has delivered an eight-minute monologue, breaking down the severity of these clashes and giving his carefully-crafted opinion on the matter. In his own words, Trevor Noah highlighted the huge advantages Israel has over Palestine, questioning the ‘over-zealous’ use of force in its retaliation towards the disputed territory. He also made this analogy:

“Is this a fair fight? Well, Israel has one of the most advanced defence systems in the world. They could crush Gaza and Palestine in an instant. I know this is contentious, I know people will hate me for this… but I have to say this: If you are in a fight where you know the other can’t beat you, how hard should you retaliate when they try to help you?”

“I used to get into fights with my little brothers. But my mom told me not to hit them back, because they can’t hurt me the way I can hurt them. I’m not trivialising the issue, I’m just telling you my perception. With Israel & Palestine, there is a major difference in power. All I’m asking is this; when you have this much power, what is your responsibility?”

Israel and Palestine. Let’s talk about it. pic.twitter.com/prv6Z7TnoL

Latest updates and news from Israel and Palestine, Thursday 13 May

Israel’s air force launched multiple strikes with fighter jets – targeting what it described as ‘locations linked to Hamas’, the Islamist group that controls Gaza; 83 people have been killed here since Monday, including 17 children, with more than 480 people wounded as heavy bombardment has rocked the coastal enclave and brought down entire tower blocks.

The Israeli military said it had struck Gaza targets more than 600 times, while Hamas had fired scores of rockets towards Israel. The unrest has been driven by anger over the looming evictions of Palestinian families from the Sheikh Jarrah neighbourhood of East Jerusalem. Tensions remain high on Thursday, with no end in sight for these acts of violence.