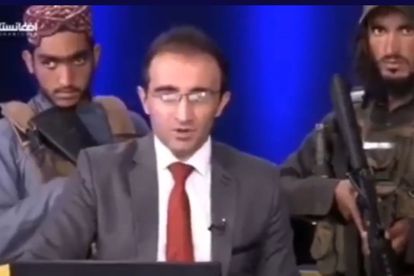 A video of a TV news anchor in Afghanistan presenting a bulletin while surrounded by gun-toting members of the Taliban, has been doing the rounds on social media, prompting more shock than anything else.

The country was seized suddenly by the islamist group after it swept into the capital Kabul several weeks ago and took over the presidential palace, forcing President Ashraf Ghani to flee.

In the clip, the news anchor tells viewers to not be afraid of the Taliban, before he goes on to interview members some of its members.

“This is what a political debate now looks like on Afghan TV, Taliban foot soldiers watching over the host. The presenter talks about the collapse of the Ghani govt & says the Islamic Emirate says the Afghan people should not to be afraid,” Hakim tweeted.

According to WIO News, the show is called Pardaz and the anchor is alleged to have told viewers to cooperate with the Taliban.

The programme was filmed at the Afghan TV network Peace Studio on Sunday, 29 August 2021, just two days before the United States (US) were set to conclude their agreement in Afghanistan.

Just recently, a prominent news anchor also from Afghanistan, Beheshta Arghand left the country after her ground-breaking interview with a senior Taliban representative on the air. Arghand spoke about her decision to leave, saying almost all well-known reporters and journalists have opted to leave the war-torn nation out of fear.