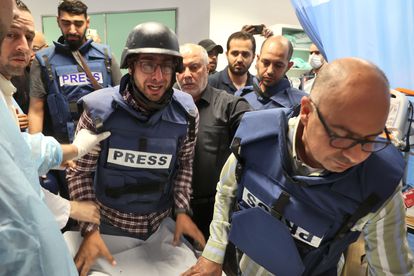 Journalists escort the body of veteran Al Jazeera journalist Shireen Abu Aqleh, who was shot dead as she covered a raid on the West Bank’s Jenin refugee camp, on 11 May, 2022, at the hospital in Jenin. Photo by JAAFAR ASHTIYEH / AFP

Journalists escort the body of veteran Al Jazeera journalist Shireen Abu Aqleh, who was shot dead as she covered a raid on the West Bank’s Jenin refugee camp, on 11 May, 2022, at the hospital in Jenin. Photo by JAAFAR ASHTIYEH / AFP

Abu Aqleh, a Palestinian Christian who also held US citizenship, was a prominent figure in the channel’s Arabic news service.

Another Al Jazeera journalist, producer Ali al-Samudi, was wounded in the incident, the broadcaster added.

An AFP photographer at the scene said Abu Aqleh was wearing a press flak jacket when she was shot. The photographer reported that Israeli forces were firing in the area and then saw Abu Aqleh’s body lying on the ground.

The Israeli army confirmed it had conducted an operation in Jenin refugee camp early Wednesday but firmly denied it had deliberately targeted a reporter.

The army said there was an exchange of fire between suspects and security forces and that it was “investigating the event and looking into the possibility that journalists were hit by the Palestinian gunmen”.

“The (army) of course does not aim at journalists,”

A statement from Al Jazeera said:

It called on the international community to hold the Israeli forces accountable for their “intentional targeting and killing” of the journalist.

WHO SHOT THE JOURNALIST?

“Journalists must be protected in conflict zones and we all have a responsibility to get to the truth,”

The US ambassador to Israel, Tom Nides, tweeted that he was “very sad to learn of the death of American and Palestinian journalist Shireen Abu Aqleh” and called for “a thorough investigation into the circumstances of her death”.

“According to the information we’ve gathered, it appears likely that armed Palestinians — who were indiscriminately firing at the time — were responsible for the unfortunate death of the journalist,”

Bennett said in a statement.

The wounded Al Jazeera producer, Samudi, said there were no Palestinian fighters in the area where Abu Aqleh was shot.

“If there were resistance fighters, we would not have gone into the area,” he said in testimony posted online, stating that the Israelis “fired towards us”.

In recent weeks, the army has stepped up operations in Jenin, a historic flashpoint in the Israeli-Palestinian conflict. Several of the assailants blamed for deadly attacks on Israelis in recent weeks were from the area.

The army said that during its operation in the camp, “massive fire was shot toward Israeli forces by tens of armed Palestinian gunmen”.

The fatal shooting comes nearly a year after an Israeli air strike destroyed a Gaza building that housed the offices of Al Jazeera and news agency AP.

Israel has said the building also hosted offices for key members of the Hamas Islamist group, which controls the Israeli-blockaded Gaza strip.

The Palestinian Authority called Abu Aqleh’s killing an “execution” and part of an Israeli effort to obscure the “truth” about its occupation of the West Bank.

Qatar’s assistant foreign minister Lolwah Al Khater said Israeli troops had killed Abu Aqleh “by shooting her in the face” in what she called an act of “state sponsored Israeli terrorism”.

Tensions have risen in recent months as Israel has grappled with a wave of attacks which has killed at least 18 people since 22 March, including an Arab-Israeli police officer and two Ukrainians.

A total of 30 Palestinians and three Israeli Arabs have died during the same period, according to an AFP tally, among them perpetrators of attacks and those killed by Israeli security forces in West Bank operations.