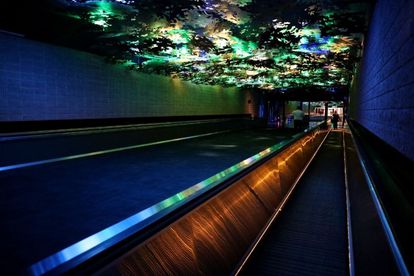 Police were hunting a convicted felon who fled Atlanta’s international airport after his gun was accidentally discharged during a security search and sparked panic.

The incident on Saturday sent dozens of passengers scurrying for cover and resulted in three injuries, none of which were caused by the discharge.

“We are actively pursuing this individual,” Atlanta Police’s Major Reginald Moorman said in a press conference after identifying the suspect as 42-year-old Kenny Wells.

The Transportation Security Administration (TSA) said the incident occurred after a “prohibited item” was identified inside a passenger’s baggage by an X-Ray machine.

As a security officer opened the compartment containing the item, “the passenger lunged into the bag and grabbed a firearm, at which point it discharged.”

“The passenger then fled the area, running out of the airport exit,” the TSA said, adding that the officer had told the passenger not to touch the item.

One person was injured in a fall in the ensuing panic and two others complained of shortness of breath, police said.

Shortly after the incident at around 1:30 pm (18:30 GMT), the airport said on Twitter that there was no active shooter, and “there is no danger to passengers or employees.”

ACCIDENT SENT PANIC AT THE AIRPORT

The loud noise sent many people ducking and running, knocking over suitcases and stanchions as they scrambled to escape, footage aired by CNN showed.

People could be heard shouting “Get down! Get down!” while others slid across the floor.

Some took shelter in airport restaurants, while others ran onto the tarmac.

The incident came on one of the busiest travel weekends of the year, just days before the Thanksgiving holiday.

Since the beginning of the year, the TSA has detected more than 450 firearms at checkpoints in the Atlanta airport alone.

A controversial Georgia law passed in 2014 allows people to carry permitted guns into airports although not past screening checkpoints, as well as into bars, schools and churches.

FIREARMS UNDER FEDERAL LAW IN THE US

Under federal law, it is illegal to carry a weapon into a TSA screening area.

Passengers may travel with firearms in checked bags when they are unloaded, locked and stored inside a hard-sided case.

The weapon must additionally be declared.