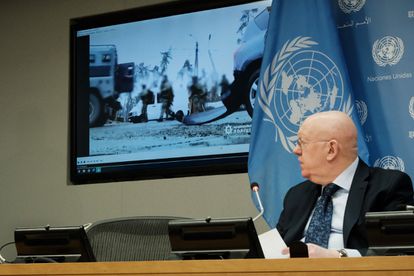 The UN’s atomic watchdog called Tuesday for a security zone to be set up around Ukraine’s Zaporizhzhia nuclear power plant, which is occupied by Russia, as the area was hit by more shelling.

Russian troops seized control of the plant — Europe’s biggest atomic facility — in March and there have been repeated attacks in the vicinity, sparking fears of a nuclear disaster.

“The current situation is untenable,” the International Atomic Energy Agency (IAEA) said in a report after it sent inspectors to the plant last week.

“There is an urgent need for interim measures to prevent a nuclear accident…. This can be achieved by the immediate establishment of a nuclear safety and security protection zone.”

At the United Nations, Russia said it regretted that the report did not blame Ukraine for the attacks.

“We do understand your position as an international regulator, but in the current situation it’s very important to call things by their name,”

Russia and Ukraine have blamed each other for shelling of the site, which took place again Tuesday despite the watchdog’s recommendations.

“If the provocations by the Kyiv regime continue, there is no guarantee that there won’t be serious consequences, and the responsibility for that lies fully with Kyiv and its Western backers and all other members of Security Council,” Nebenzia said.

Zelensky on the proposed security zone

Ukrainian President Volodymyr Zelensky said he welcomed the fact that the report noted the Russian military occupation of the plant.

He said that if the proposed security zone was aimed at demilitarizing “the territory of the nuclear power plant… then we can support it.”

Kyiv and Moscow continued to trade blame Tuesday for attacks on the Zaporizhzhia plant, and on the city of Energodar where it is situated.

The IAEA sent a 14-person team to the site last week. At least two members were to remain on a permanent basis to ensure the facility’s safety.

But on Monday, the last working reactor was disconnected from the grid after shelling caused a fire.

Meanwhile US President Joe Biden’s administration said it would be counterproductive to brand Russia a state sponsor of terrorism, rejecting calls from Ukraine and lawmakers to take the far-reaching action.

Biden, asked by a reporter on Monday if he would blacklist Russia as a terrorist state, said simply, “no,” after months of non-committal answers from senior officials.

Asked Tuesday whether a decision had been made, White House Press Secretary Karine Jean-Pierre said a terrorism designation was “not the most effective or strongest path forward” to “hold Russia accountable.”

She said the designation would hamper aid delivery to parts of war-ravaged Ukraine or prevent aid groups and companies from participating in a deal brokered by the United Nations and Turkey to ship badly needed grain from Ukraine’s blockaded ports.

Separately on Tuesday, a pro-Kremlin official in the Russian-controlled port city of Berdyansk in southern Ukraine was seriously injured in a car blast, according to Moscow-installed authorities.

In the past months, several officials installed by Russian forces in Moscow-controlled territories in Ukraine have been killed or wounded in attacks.

Kyiv has not formally claimed responsibility.

Ukraine has recently claimed its first gains in a counter-offensive against the Russian army in the south, saying it has recaptured several areas and destroyed multiple targets.

A US official said Tuesday that Russia is buying millions of rockets and artillery shells from North Korea to replenish stocks depleted by months of intense fighting.

“This purchase indicates that the Russian military continues to suffer from severe supply shortages in Ukraine, due in part to export controls and sanctions,” the US official said, on grounds of anonymity.

Western sanctions have made it harder for Moscow to acquire components to manufacture replacements, including computer chips.