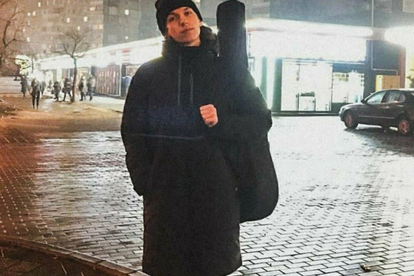 A family handout photograph taken with a smartphone on December 2021 in Mariupol and released on 31 May 2022, shows Ivan Druz, who left Mariupol with his step-brother in April, 2022. – Some of the Ukrainians who managed to leave the war-torn city of Mariupol in the east of the country said they were given no choice and had to leave the city to go to Russia — a policy that the Ukrainian government is calling a form of deportation. Photo: Handout / FAMILY HANDOUT / AFP

A family handout photograph taken with a smartphone on December 2021 in Mariupol and released on 31 May 2022, shows Ivan Druz, who left Mariupol with his step-brother in April, 2022. – Some of the Ukrainians who managed to leave the war-torn city of Mariupol in the east of the country said they were given no choice and had to leave the city to go to Russia — a policy that the Ukrainian government is calling a form of deportation. Photo: Handout / FAMILY HANDOUT / AFP

Some residents of the devastated Ukrainian city of Mariupol who managed to escape are saying they were given no choice but to travel to Russia in what the Kyiv government regards as “deportations”.

After spending weeks in a Mariupol basement and following the death of her father, who was killed in a rocket attack, Tetyana decided to leave her city to try to save her nine-year-old daughter.

With no mobile network or any possibility of communicating, she took advantage of a lull in the shelling to go to an assembly point arranged by pro-Russian authorities to find out about exit routes.

There, she was told going to Russia was the only option.

“We were in shock. We did not want to go to Russia,”

the 38-year-old accountant said on the phone from Riga in Latvia where she has since sought refuge with her family.

“How can you go to a country that wants to kill you?”

For several weeks, Ukrainian authorities have been accusing Moscow of “illegally transferring” more than a million Ukrainians to Russia or to the parts of Ukraine currently controlled by Russian forces.

A Russian defence ministry official, Mikhail Mizintsev, confirmed the one million number but said the transfers of civilians was only being done to “evacuate” them away from “dangerous areas”.

Some civilians have indeed been forced to go towards Russia because travel to Ukrainian-held areas was blocked by fighting.

Speaking to AFP after crossing from Russia into Estonia, Yelyzaveta, originally from Izyum, a city in the east currently held by Russian forces, said this was the case for her.

“It was impossible to go towards Ukraine,” Yelyzaveta told AFP.

UKRAINIANS HAVE ‘NO OPTION’

Like Tetyana, two other families from Mariupol — where the Ukrainian government says 20 000 people were killed, said they too were forced to go to Russia.

Svitlana, an employee in a large industrial concern, also hid in a basement with her husband and parents-in-law in Mariupol until some Russian soldiers ordered them to a part of the city fully in Russian hands.

“When an armed man tells you that, you can’t really say no,” said the 46-year-old, who has since been able to travel to Lviv in western Ukraine.

Her family was initially taken to Novoazovsk, a small town near Mariupol that is in the hands of Russia-backed separatists.

There they stayed for four days in a school.

They were then transferred to Starobesheve, where they were put up in a crowded community centre where people slept on the floor.

“The worst was the smell of dirty feet, dirty bodies. It stayed on our things even after we washed them many times,”

Three days later, the family was interrogated in a building occupied by separatist police.

They had to answer written questions about whether they had relatives in the Ukrainian army, their fingerprints were taken, and they had to hand over their phones for checks.

In a separate room, the men had to undress to show they did not have any Ukrainian patriotic tattoos or combat wounds — a sign that they might be in the military.

“My husband had to take off everything except his underwear and his socks,”

“We also deleted all photos and social media from our phones,” she said, fearing possible repercussions because of her “pro-Ukrainian position”.

Ivan Druz, 23, who left Mariupol with his half-brother in April, suffered the same treatment in Starobesheve.

He was then hoping to go to territory controlled by Ukraine but after a lot of moving around within Russian-occupied areas, Druz, who is now in Riga, was told it was not possible.

“At first they tire you out and then they tell you that you can only leave in one direction,”

After arriving at the Russian border, he had to undress and answer questions about chats with his aunt in Ukrainian.

“They asked me why she was writing to me in Ukrainian” and “wanted to check that I was not a Nazi,”

Once in Russia, the families of Tetyana and Druz were sent to Taganrog, around 100 kilometres (62 miles) from Mariupol.

Just after arriving, they were told by officials that they had to travel by train to Vladimir — around 1 000 kilometres further north.

From there, Ivan and his half-brother had to leave again, this time to the city of Murom, 130 kilometres to the southeast, where they were put up in a hostel for refugees.

Thanks to Russian friends, the families of Ivan, Tetyana and Svitlana eventually travelled to Moscow and took buses for Latvia or Estonia where Ukrainian refugees are being welcomed.

“Once in Latvia, we finally felt free,”