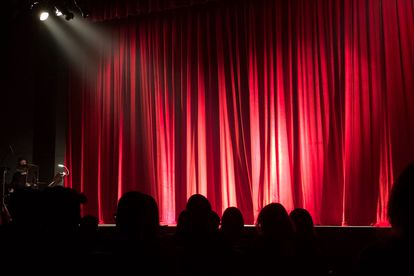 The play is being staged at the Komuna Theatre — a short walk from the central train station which saw millions of people transit through at the start of the war. Photo: PEXELS

The play is being staged at the Komuna Theatre — a short walk from the central train station which saw millions of people transit through at the start of the war. Photo: PEXELS

As a refugee herself, Anna Lysenko finds it cathartic to be playing the character of a Ukrainian woman forced to flee her homeland in a new production in Warsaw.

“You open your soul. Those emotions, the pain that is in you, you let it out on to the surface,”

Lysenko, 21, told AFP as she finished her make up before the play.

Lysenko had to escape with her child, leaving behind her husband who is serving in the armed forces and forcing her and look for a job in theatre in a new city.

“Little by little, I came out of my cocoon, out of my depression,”

The play “Six Ribs of Anger” — a reference to different levels of trauma — tells the stories of five Ukrainian women living in a refugee centre in Poland.

The plot documents their grief, fear and anger as well as their fantasies and how they help each other through the trauma.

It is based on extensive interviews carried out by the directors in a sprawling refugee centre near Warsaw soon after Russian troops began their invasion.

The play is being staged at the Komuna Theatre — a short walk from the central train station which saw millions of people transit through at the start of the war.

Lysenko plays the character of Lesia, a ballerina from Bucha — a town near Kyiv that has become synonymous with the alleged atrocities carried out by Russia.

In one scene, she imagines herself in a tutu with a sword interrogating the Russian soldier who killed her mother.

There is also a scene in which another character re-lives her last moments with her missing husband and daughter in Mariupol, a city that was devastated while being taken over by Russian troops.

“The aim of this play is to give strength to Ukrainians, show what they have endured and how strong they are, and how they can persevere,”

The director remembered entering the refugee centre for the first time.

“I got shivers. It was a huge space under black sky, a black ceiling,” he said, remembering the smell “like in a train when you travel for a long time”.

“It was quite shocking. Children were playing, roller skating all over the centre so life was continuing there but this life was unbelievably unreal”.

The play has only ever been staged in Warsaw so far but Koc hopes he will be able to take it on tour, also to raise awareness about the war and its victims.

Koc said it was “important” for the actors to take part in the production “because they are themselves in this situation” but it was not always an easy process.

“It’s impossible to work with them like with people who have a place to live, have comfort. You have to keep it in mind”.

The production is deeply moving but there are lighter moments too — such as jokes about Polish cuisine and a scene in which the characters perform dressed up as Eurovision winners Kalush Orchestra.

Mariya Severylova, 33, said she also hoped the play would connect to people in a way that watching the news could not.

“Theatre involves you more. You’re sitting face to face. There is a living person in front of you,”

said Severylova, who was dressed in a brightly-coloured tracksuit.

Severylova plays Sniezhna, a loud but vulnerable single mother who fantasises about President Volodymyr Zelensky coming to her aid and one day moving to Italy.

The actress said she fled 10 days after the war started and calls it “a terrible tragedy that affects everyone forever”.

“Every time I perform I know that we are talking about the thing that is most important — there is a war going on and everyone should know about it.”