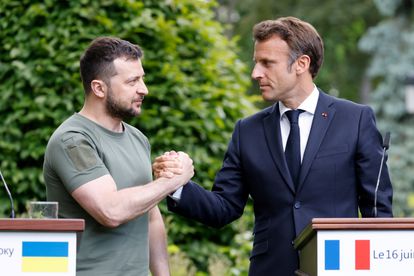 Ukrainian President Volodymyr Zelensky (L) and French Fresident Emmanuel Macron shake hands after giving a press conference in at Mariinsky Palace in Kyiv, on June 16, 2022. – The leaders of major EU powers France, Germany and Italy vowed on June 16 to help Ukraine defeat Russia and to rebuild its shattered cities, in a visit to a war-torn Kyiv suburb. (Photo by Ludovic MARIN / POOL / AFP)

Ukrainian President Volodymyr Zelensky (L) and French Fresident Emmanuel Macron shake hands after giving a press conference in at Mariinsky Palace in Kyiv, on June 16, 2022. – The leaders of major EU powers France, Germany and Italy vowed on June 16 to help Ukraine defeat Russia and to rebuild its shattered cities, in a visit to a war-torn Kyiv suburb. (Photo by Ludovic MARIN / POOL / AFP)

“The city is ready to defend itself,”

insists Vadym Lyakh, mayor of Sloviansk in eastern Ukraine which could soon become a fighting hotspot as Moscow’s troops advance from the north.

Outside his office in this small leafy city in the Donetsk region, people were on Monday filling up bottles from a large water barrel.

The situation “is complex, because the front in recent weeks has come closer, to within 15-20 kilometres (9-12 miles),” Lyakh told AFP, dressed in a military-style khaki T-shirt.

Hopefully, “the new weaponry that our army needs will come soon”, he said.

The fighting has already affected people in Sloviansk.

“There’s no (mains) water, no gas, but at least we have electricity,”

said Yuriy, 66, as he filled a five-litre bottle with water to flush the toilet.

Due to heavy fighting in areas with pumping stations, “there’s no (mains) water at all at the moment, only natural springs and tankers,” the mayor said.

Although the electricity supply was “unstable”, a third of the shops were open and aid was coming in, he said.

Despite the hardships, Yuriy’s 63-year-old wife Valentina was upbeat about the prospects for Ukraine’s forces.

If it comes to it, it won’t be the first time there’s been a battle for control of Sloviansk, as its recent history shows.

It was seized by Russia-backed separatists in 2014 and then retaken by Ukrainian forces after a lengthy siege.

On Monday, the distant thud of artillery could be heard in the main square.

As municipal chief, the mayor says he doesn’t interfere in military matters although he is in contact with the army every day.

“If it’s necessary for defence, it will be done, regardless of who objects,”

“They know best what is necessary for military operations.”

Lyakh said he hadn’t spoken to officials in war-torn cities further east, such as Severodonetsk and Lysychansk.

“The algorithm is clear: everything will depend on the situation on the front,” he said.

Preparations include setting up “working spaces… in bomb shelters and hospital basements to give emergency care even under bombing”.

Before the war, Sloviansk had a population of some 100 000 people but now only has a quarter of that, which Lyakh said was still “a lot”.

In Kramatorsk, another city facing a possible Russian onslaught, the atmosphere was more bustling, with crowds of soldiers in supermarkets and cafes.

“In the evenings or at night you can see some explosions about 40-45 kilometres away.”

The Russians were coming “closer but our army is trying to hold the positions now,” he added.

In recent months, the authorities and the army had helped build up the defences and Kramatorsk was “more or less” ready, he said.

“We’re all waiting for a miracle, we’re hoping for peace, for this fratricidal war to end soon,”

“So far everything is OK here but it’s very hard psychologically when you see on TV what is happening in other cities,” said Svitlana, 48, a butcher at the market.

The city still has mains water and electricity, despite occasional power cuts.

“The only thing we don’t have in the Donetsk region is gas, because of the broken pipes from the Kharkiv and Lugansk regions,” Goncharenko said, referring to war-torn areas.

Some 30% of the residents — around 60 000 people — were still living in the city, with phone records showing that 10 000 people who had left had recently come back, he said.

“If something happens or the war comes closer, it would be more dangerous for them,” he said, warning that “Russian terrorists” could use the local population as human shields.