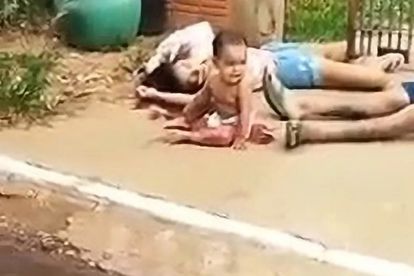 A warning to our more sensitive readers: This story contains come heavily graphic content which some may find disturbing. A baby boy in Brazil was left sitting his a pool of his parents’ blood, just moments after they were fatally shot.

According to Daily Mail, 18-year-old Nicolas Elias Albuquerque do Prado and his 19-year-old wife Cleidiana Pereira Alixandre were involved in some shady dealings with drug dealers and traffickers They had reportedly travelled to the town of Alto Garcas on Friday with their toddler.

They then arrived at their destination, which was a known drug den. They were then accosted by two men who then opened fire on them, killing them almost instantly.

The owner of the property reportedly witnessed the horrific incident and said both men fled the scene in a bike and didn’t recognise any of them.

Hearbreaking pictures have been doing the rounds on social media, showing the baby crying besides his parents’ bodies.

Baby’s parents had shady criminal past

The couple was apparently no stranger to the run-ins with the law – do Prado had a criminal record for drug trafficking and was being investigated for two counts of robbery while Alixandre had previously been arrested for receiving stolen goods.

Fortunately, the couple’s baby was not struck by the gunfire, however he was taken to hospital for treatment for injuries sustained when he fell to the ground.