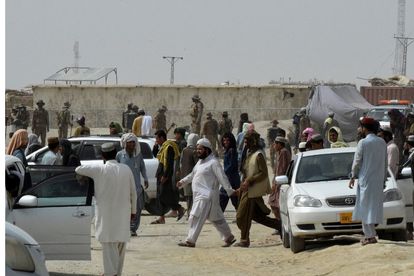 Stranded people gather as Pakistani troops stand guard at the border town of Chaman on July 14, 2021, after the Taliban claimed they had captured the Afghan side of the border crossing of Spin Boldak along the frontier with Pakistan.
Banaras KHAN / AFP

Stranded people gather as Pakistani troops stand guard at the border town of Chaman on July 14, 2021, after the Taliban claimed they had captured the Afghan side of the border crossing of Spin Boldak along the frontier with Pakistan.
Banaras KHAN / AFP

The Taliban captured the strategic border crossing of Spin Boldak on the frontier with Pakistan Wednesday, continuing sweeping gains made since foreign forces stepped up their withdrawal from Afghanistan.

Afghanistan’s interior ministry denied the insurgents had taken the area even as social media was flooded with pictures of Taliban fighters relaxing in the frontier town.

Residents also told AFP it was in the Taliban’s hands.

Spin Boldak is the latest in a string of border crossings and dry ports seized by the Taliban in recent weeks, with the insurgents looking to choke off much-needed revenue from the government in Kabul while also filling their own coffers.

“I’m afraid Afghan women and girls are going to suffer unspeakable harm… They are going to be left behind to be slaughtered by these very brutal people and it breaks my heart,” he told German broadcaster Deutsche Welle.

Asked whether he thought the withdrawal was a mistake, Bush replied: “Yes, I think it is.”

It was his administration that launched the US invasion into Afghanistan in 2001 that toppled the Taliban government following the September 11 attacks on US soil by Al-Qaeda militants.

Along with his key security advisers, Bush was later blamed for a series of miscalculations in Afghanistan that led to a costly 20-year occupation and the revival of the Taliban movement.

Border is key crossing and valuable for Taliban

The seizure of the border crossing follows days of heavy fighting across Kandahar province, where the government was forced to deploy commando fighters to prevent the fall of the provincial capital even as the insurgents inched closer to taking the frontier.

In a statement, insurgent spokesman Zabihullah Mujahid assured traders and residents there that their “security is guaranteed”.

But Afghan officials insisted they were still in control.

“The terrorist Taliban had some movements near the border area… The security forces have repelled the attack,” interior ministry spokesman Tareq Arian told AFP.

Residents disputed the government’s claims, however.

“I went to my shop this morning and saw that the Taliban are everywhere. They are in the bazaar, in police HQ and custom areas. I can also hear the sound of fighting nearby,” said Raz Mohammad, a shopkeeper who works near the border.

The border crossing is one of the most strategically valuable for the Taliban.

It provides direct access to Pakistan’s Balochistan province — where the insurgents’ top leadership has been based for decades — along with an unknown number of reserve fighters who regularly enter Afghanistan to help bolster their ranks.

Hours after the crossing fell, an AFP reporter on the Pakistani side saw around 150 Taliban fighters riding on motorcycles, waving insurgent flags, as they demanded to be allowed to cross into Afghanistan.

Balochistan is a favoured destination for fighters regularly heading for medical treatment and hosts many of their families.

A major highway leading from the border connects to Pakistan’s commercial capital Karachi and its sprawling port on the Arabian Sea, which is considered a linchpin for Afghanistan’s billion-dollar heroin trade that has provided a crucial source of revenue for the Taliban’s war chest over the years.

With the United States just weeks away from pulling out its last troops, the Taliban has swept through much of the country, and the government now holds little more than a constellation of provincial capitals that must largely be resupplied by air.

The sheer speed and scale of the insurgents’ multi-pronged offensives have stirred fears that Afghan security forces are being overwhelmed.

The yawning catastrophe has also sparked a diplomatic free-for-all with countries trading blame and throwing jabs over the numerous policy blunders made in Afghanistan over the years.

“Russia for several years already talked about a situation like this developing. To call a spade a spade, we foresaw this much earlier,” said the Kremlin’s envoy for Afghanistan, Zamir Kabulov, in an interview with Russian news agency RIA.

In another sign Western governments were rapidly reassessing their Afghanistan policies, British Defence Secretary Ben Wallace said the United Kingdom was prepared to work with the Taliban if it enters into a power-sharing government.

“Whatever the government of the day is, provided it adheres to certain international norms, the UK Government will engage with it,” he told the Daily Telegraph.

“All peace processes require you to come to terms with the enemy. Sometimes, that’s what it is.”