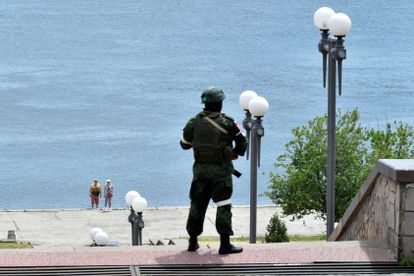 Russian President Vladimir Putin on Wednesday declared martial law in four regions of Ukraine recently annexed by Moscow as his proxy officials in a southern city pulled out with Ukraine troops advancing.

The decree came as Ukraine said it had downed “several Russian rockets” over Kyiv in a third consecutive day of missile and drone attacks on the capital after a string of battlefield defeats for Moscow.

“We are working on solving very complex large-scale tasks to ensure security and protect the future of Russia,”

Pro-Kremlin officials meanwhile said they were pulling out of the key southern Ukraine city of Kherson on Wednesday, as Kyiv’s forces advanced on territory in Russian hands since the war’s earliest days.

In parts of Ukraine recently re-captured from Russian forces, meanwhile, repairs are underway before winter begins, but many residents still depend on humanitarian aid.

“Apart from this, nothing is working,” said Ivan Zakharchenko, a 70-year-old resident of Izyum queueing for aid in the square where President Volodymyr Zelensky celebrated the town’s liberation just over a month ago.

Ukraine ‘will not give up’

Kherson was the first and only major city to fall to Moscow’s troops since the February invasion began and retaking it would be a crucial prize in Ukraine’s counter-offensive.

But Andriy Yermak, the Ukrainian presidency’s chief of staff, called the moves a “propaganda show” and accused Russia of “trying to scare the people of Kherson”.

Ukrainian forces “do not fire at Ukrainian cities,” Yermak wrote on Telegram.

Ukraine’s resilience has won plaudits around the world and the European Parliament on Wednesday awarded the annual Sakharov Prize for human rights to “brave” Ukrainians.

After the award Zelensky tweeted that “Ukrainians prove dedication to the values of freedom, democracy every day on the battlefield”.

Kherson is located on the western bank of the Dnieper, the same side where Ukrainian troops have been moving forward in a counter-offensive that began in August.

Saldo said the pull-out, along with the organised movement of civilians from the city, was a precaution and vowed that Russian forces would continue to fight Ukraine.

Local officials said they were planning to move up to 60 000 civilians from the city of Kherson over a period of around six days.

Ukrainian forces have targeted bridges across the river to disrupt supply lines, with Russian-installed officials saying that evacuations were being undertaken with ferries.

Russia’s Rossiya 24 state TV showed images of people waiting to board ferries to cross the river.

Pro-Russian officials have said civilians would only be allowed to leave towards Russia or Russian-held parts of Ukraine.

Sergiy Khlan, the Ukrainian deputy head of the Kherson region, said the evacuation “is equal to deportation”.

Separately, the secretary of Russia’s National Security Council Nikolay Patrushev said on Wednesday that around five million people from Russian-held parts of Ukraine have “found shelter” in Russia.

Ukraine has re-captured occupied territory in the east of the country in recent weeks.

Its advance in the south has been far slower but has been gaining momentum in recent days.

There have been some Russian advances too.

Russian forces on Tuesday claimed to have retaken territory from Ukrainian troops in the eastern Kharkiv region.

Moscow has also been building up its defences in the territory it still holds.

Russia’s Wagner mercenary group said it was working on building a fortified line of defence in Ukraine’s eastern Lugansk region.

“It is a multi-level and layered defence,” the group’s founder Yevgeny Prigozhin said on the social media of his company Concord.

Kyiv’s recapturing of swathes of its territory in the east and parts of the south has however been followed by missile and drone strikes that have demolished large parts of Ukraine’s power grid ahead of winter.

The government has warned of the risk of blackouts, saying about 30 percent of Ukraine’s power stations have been destroyed.

An energy facility in the city was then hit by strikes on Tuesday, killing at least two people.

On Wednesday, several explosions were heard in the centre before Kyiv mayor Vitali Klitschko said “several Russian rockets” had been successfully shot down.

Kyiv and its Western allies have accused Moscow of using Iranian-made drones, with Ukraine saying it had successfully shot down 223 of them since mid-September.

The Kremlin and Iran have denied this, but EU foreign policy spokeswoman Nabila Massrali said the EU has “sufficient evidence” and would prepare fresh sanctions on Iran.