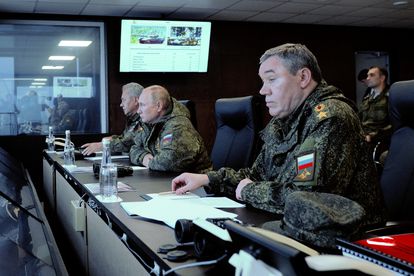 Russian President Vladimir Putin (C), accompanied by Defence Minister Sergei Shoigu (L) and Valery Gerasimov, the chief of the Russian General Staff, oversees the ‘Vostok-2022’ military exercises at the Sergeevskyi training ground outside the city of Ussuriysk on the Russian Far East on September 6, 2022. – The Vostok 2022 military exercises, involving several Kremlin-friendly countries including China, takes place from September 1-7 across several training grounds in Russia’s Far East and in the waters off it. Over 50,000 soldiers and more than 5,000 units of military equipment, including 140 aircraft and 60 ships, are involved in the drills. Photo: Mikhail KLIMENTYEV / SPUTNIK / AFP.

Russian President Vladimir Putin (C), accompanied by Defence Minister Sergei Shoigu (L) and Valery Gerasimov, the chief of the Russian General Staff, oversees the ‘Vostok-2022’ military exercises at the Sergeevskyi training ground outside the city of Ussuriysk on the Russian Far East on September 6, 2022. – The Vostok 2022 military exercises, involving several Kremlin-friendly countries including China, takes place from September 1-7 across several training grounds in Russia’s Far East and in the waters off it. Over 50,000 soldiers and more than 5,000 units of military equipment, including 140 aircraft and 60 ships, are involved in the drills. Photo: Mikhail KLIMENTYEV / SPUTNIK / AFP.

Ukraine has announced fresh gains in its counter-offensive, including the recapture of the strategic city of Izyum in the country’s east, where Kyiv accused Russia of carrying out reprisal strikes against electricity infrastructure.

Moscow conceded having lost territory, and experts have said the confirmed recapture by Ukraine of the city would represent a serious blow to Moscow’s military ambitions in east Ukraine.

“A total blackout in the Kharkiv and Donetsk regions, a partial one in the Zaporizhzhia, Dnipropetrovsk and Sumy regions,”

Zelensky said in a statement on social media.

“No military facilities,” he added. “The goal is to deprive people of light and heat.”

Claims: Attacks on Russia were an ‘act of desperation’

Local Ukrainian authorities pointed to Russian strikes on their power infrastructure. Some districts reported later that power had been restored.

In Kharkiv region, a Russian strike on a power station killed one employee, Governor Oleg Synegubov said. He added that power had been partially brought back.

The Russian strikes hit 15 locations on Sunday, from Kramatorsk in the east to Mykolaiv in the south and Dnipro in between, Ukraine’s military said.

The blackouts hit regions with an estimated combined population of nine million people — including territory controlled by Russia.

They came as Ukrainian forces claimed to have recaptured dozens of towns and villages in eastern Ukraine.

Ukraine had already lost all power from the Russian-controlled Zaporizhzhia nuclear plant.

The country’s nuclear energy agency said the final reactor at the plant, Europe’s largest nuclear power station and a focal point of the conflict, had been shut off as a safety measure.

Russian President Vladimir Putin warned that Ukrainian attacks near the station could have “catastrophic consequences”.

Sunday’s address marked 200 days since the beginning of Russia’s invasion.

The speed of Ukraine’s fightback has apparently caught Russia’s military off-guard, bringing swathes of territory Moscow had controlled for months back into Kyiv’s fold.

Images posted by the Ukrainian military showed crates of munitions and military hardware scattered across territory abandoned by Russian forces.

In his evening address Sunday Zelensky praised the soldiers who had “liberated hundreds of our cities and villages… and most recently Balakliya, Izyum and Kupiansk”.

Around Balakliya, one of the first towns to be retaken by Ukrainian troops, AFP journalists saw evidence of fierce battles, with buildings destroyed or damaged and streets mostly deserted.

Earlier Sunday, the head of the Ukrainian military announced that as much as 3,000 square kilometres (1,158 square miles) had been wrested from Russia since the offensive began at the beginning of this month.

The country’s foreign minister used the momentum to appeal to Western allies for more stockpiles of sophisticated weapons.

“Weapons, weapons, weapons have been on our agenda since spring. I am grateful to partners who have answered our call: Ukraine’s battlefield successes are our shared ones,”

his statement on social media read.

The reaction in Moscow to the Ukrainian gains so far has been muted, but on Sunday a military map presented by the Russian defence ministry showed that its forces had made a major withdrawal from the Kharkiv region.

Russia controlled just a sliver of territory in the region’s east, behind the Oskil river, the revised map showed.

Russia’s military made the surprise announcement Saturday that it was “regrouping” its forces from Kharkiv to the Donetsk region just south to focus its military efforts there.

That came shortly after Moscow said it was actually sending reinforcements towards Kharkiv.

The fresh fighting in and around the Zaporizhzhia plant has sharpened fears of another nuclear incident comparable to the Chernobyl disaster in northern Ukraine in 1986.

Putin, in a telephone call with French President Emmanuel Macron, once again accused Ukraine of repeated attacks on the facility held by Russian troops.

The Russian leader drew attention to “regular Ukrainian attacks”  which could have “catastrophic consequences”, the Kremlin said in a statement.

Each side has repeatedly blamed the other for shelling in the area.

Macron’s office, in its summary of the conversation, said he had told Putin “the Russian occupation was the reason for the risks” facing the atomic power station.

In Balakliya, 52-year-old Iryna Stepanenko was outside cycling for the first time in months.

She had hidden in her basement for three months, she said, from the town that was home to about 27 000 people before the invasion.

But while she was relieved that Kyiv’s forces were back, she still feared for the future.

Vusi Thembakayo and Mahlolo’s divorce: Battle gets messy in court