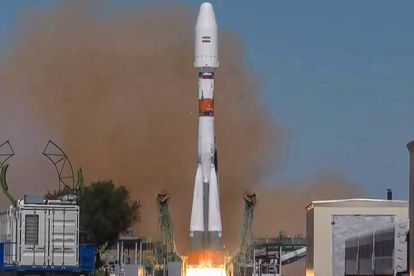 This handout video grab taken and released on 9 August, 2022 by the Russian Space Agency Roscosmos shows the Soyuz-2.1b rocket carrying the Khayyam satellite blasting off from a launchpad at the Baikonur Cosmodrome. – An Iranian satellite launched by Russia blasted off from Kazakhstan early 9 August, 2022, and went into orbit amid controversy that Moscow might use it to improve its surveillance of military targets in Ukraine. Photo: Handout / Russian Space Agency Roscosmos / AFP

This handout video grab taken and released on 9 August, 2022 by the Russian Space Agency Roscosmos shows the Soyuz-2.1b rocket carrying the Khayyam satellite blasting off from a launchpad at the Baikonur Cosmodrome. – An Iranian satellite launched by Russia blasted off from Kazakhstan early 9 August, 2022, and went into orbit amid controversy that Moscow might use it to improve its surveillance of military targets in Ukraine. Photo: Handout / Russian Space Agency Roscosmos / AFP

An Iranian satellite launched by Russia blasted off from Kazakhstan Tuesday and reached orbit amid controversy that Moscow might use it to boost its surveillance of military targets in Ukraine.

As Russia’s international isolation grows following Western sanctions over its invasion of Ukraine, the Kremlin is seeking to pivot towards the Middle East, Asia and Africa and find new clients for its embattled space programme.

Speaking at the Moscow-controlled Baikonur Cosmodrome in the Kazakh steppe, Russian space chief Yury Borisov hailed “an important milestone in Russian-Iranian bilateral cooperation, opening the way to the implementation of new and even larger projects”.

Iran’s Telecommunications Minister Issa Zarepour, who also attended the launch of the Khayyam satellite, called the event “historic” and “a turning point for the start of a new interaction in the field of space between our two countries”.

Nasser Kanani, the Iranian foreign ministry spokesman, said on Twitter that “the brilliant path of scientific and technological progress of the Islamic republic of Iran continues despite sanctions and the enemies’ maximum pressure”.

Iran, which has maintained ties with Moscow and refrained from criticism of the Ukraine invasion, has sought to deflect suspicions that Moscow could use Khayyam to spy on Ukraine.

Responding to the launch, Washington said Russia’s growing cooperation with Iran should be viewed as a “profound threat”.

“We are aware of reports that Russia launched a satellite with significant spying capabilities on Iran’s behalf,”

a US State Department spokesperson said.

“Russia deepening an alliance with Iran is something that the whole world should look at and see as a profound threat.”

Last week, The Washington Post quoted anonymous Western intelligence officials as saying that Russia “plans to use the satellite for several months or longer” to assist its war efforts before allowing Iran to take control.

The space agency stressed on Sunday that the Islamic republic would control the satellite “from day one” in an apparent reaction to the Post’s report.

“No third country is able to access the information” sent by the satellite due to its “encrypted algorithm”,

The purpose of Khayyam is to “monitor the country’s borders”, enhance agricultural productivity and monitor water resources and natural disasters, according to the space agency.

Khayyam, apparently named after the 11th-century Persian polymath Omar Khayyam, will not be the first Iranian satellite that Russia has put into space.

In 2005, Iran’s Sina-1 satellite was deployed from Russia’s Plesetsk Cosmodrome.

Iran is currently negotiating with world powers, including Moscow, to salvage a 2015 deal aimed at reining in Tehran’s nuclear ambitions.

The United States — which quit the landmark Joint Comprehensive Plan of Action or JCPOA in 2018 under then-president Donald Trump — has accused Iran of effectively supporting Russia’s war against Ukraine while adopting a “veil of neutrality”.

Iran’s Khamenei called for “long-term cooperation” with Russia during their meeting, and Tehran has refused to join international condemnation of Moscow’s invasion of its pro-Western neighbour.

Iran insists its space programme is for civilian and defence purposes only, and does not breach the 2015 nuclear deal, or any other international agreement.

Western governments worry that satellite launch systems incorporate technologies interchangeable with those used in ballistic missiles capable of delivering a nuclear warhead, something Iran has always denied wanting to build.

Iran successfully put its first military satellite into orbit in April 2020, drawing a sharp rebuke from the United States.

Borisov, who last month replaced bombastic nationalist Dmitry Rogozin as head of the Russian space agency, had acknowledged that the national space industry is in a “difficult situation” amid tensions with the West.

Russia will continue its space programme but end activities at the International Space Station — an outlier of cooperation between Moscow and the West — after 2024, he said.