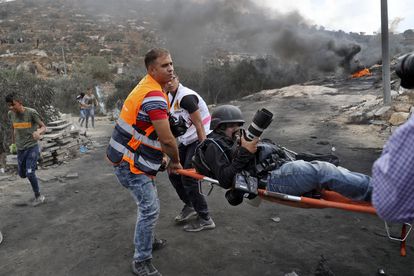 Palestinian paramedics evacuate a press photographer after he was reportedly hit by a rubber bullet during confrontations with Israeli troops, following a demonstration in the West Bank village of Beita, on September 10, 2021. Photo: JAAFAR ASHTIYEH / AFP

Palestinian paramedics evacuate a press photographer after he was reportedly hit by a rubber bullet during confrontations with Israeli troops, following a demonstration in the West Bank village of Beita, on September 10, 2021. Photo: JAAFAR ASHTIYEH / AFP

Pro-government television presenters and state newspapers in Egypt are at the forefront of a “campaign against journalism”, Reporters Without Borders (RSF) charged Thursday.

The media watchdog, in a report entitled The Puppets of President Abdel Fattah al-Sisi, said Egyptian journalists were operating in an “unsustainable working environment”, faced with “campaigns of hatred, denigration and defamation”.

The state has been “sponsoring these attacks, with the complicity of star presenters and mass media”, in a country where popular nightly talk show hosts shape public opinion,

According to RSF, Egyptian security services have become “the number two player in the media landscape”, through a holding company which has acquired “around 17%” of media outlets.

Its outlets carry out what RSF called “coordinated” media campaigns in which “star presenters slander journalists on television channels” before Egypt’s 103-million-strong population.

Egypt is regularly condemned for its human rights record, with rights groups saying there are currently 60 000 political prisoners in custody, many under charges of “spreading fake news”.

According to RSF, some prominent journalists have themselves played a key role in the crackdown, putting aside “their ethics” to become “fervent defenders of the government”.

When not charged with membership of the banned Muslim Brotherhood, dissident journalists are accused of being “foreign agents” or “inciting debauchery”, vague charges that often result in lengthy detentions, RSF said.

Egypt, where at least 20 journalists are behind bars, currently ranks 168th out of 180 countries in RSF’s press freedom index.

Police: ‘Relative’ arrested for rape and murder of 90-year-old woman