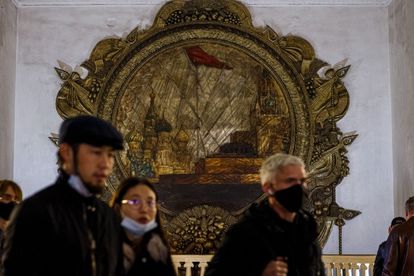 Commuters walk through a hall of Moscow metro on 19 October 2021. The Kremlin called on Russians to be “more responsible” and get vaccinated for Covid-19. Photo: DIMITAR DILKOFF / AFP

Commuters walk through a hall of Moscow metro on 19 October 2021. The Kremlin called on Russians to be “more responsible” and get vaccinated for Covid-19. Photo: DIMITAR DILKOFF / AFP

At the national level, the government is considering keeping people off work for a week to reduce social contact in a bid to lower the tide of infections.

President Vladimir Putin is expected to decide on Wednesday which government measures put to him should be implemented to curb the spread of the virus across the country.

But already Tuesday, Moscow Mayor Sergei Sobyanin ordered unvaccinated over-60s in the capital to work from home and extended mandatory vaccinations for service workers. Those restrictions take effect next Monday and are set to last until the end of February.

Sobyanin also told employers to move 30% of their staff to home working.

“With every day the number of people hospitalised with the severe form of the disease is growing,” Sobyanin said in a statement.

The number of patients in a serious condition had “doubled” since the end of the summer, he added.

The measures were announced after Russia on Tuesday registered a new 24-hour high of 1 015 coronavirus deaths, bringing the country’s official total to 225 325 – the highest in Europe.

But figures published by statistics agency Rosstat in October suggested that more than 400 000 people had died in the country from the coronavirus.

Only 35% of Russians are vaccinated, and authorities are struggling to counter anti-vaccine sentiment. Independent polls show that more than half of Russians do not plan to get a shot, despite appeals from Putin.

Sobyanin said the authorities had hoped older Muscovites would vaccinate themselves after returning from the countryside at the end of the summer.

“Unfortunately, this did not happen,” his statement said.

The surge in cases has come without any strict restrictions in place to limit Covid-19’s spread, although several regions have re-introduced QR codes for access to public places.

Russian officials have been accused of downplaying the severity of the pandemic.

Earlier Tuesday, Deputy Prime Minister Tatiana Golikova called for the introduction of a non-working week starting from October 30 to curb the spread of the virus.

She proposed that the hardest-hit regions introduce such a measure from this Saturday.

“But we ask you to support these proposals and appeal to the head of state.”

Golikova is due to submit her proposal to Putin for approval during a meeting on Wednesday.

‘NO TRUST’ IN VACCINES

Russia has struggled to innoculate its citizens despite domestic vaccines including Sputnik being widely available.

Putin insists that Russia has handled the pandemic better than most countries, but even top officials have recently voiced concern.

Pyotr Tolstoy, deputy chairman of the lower house, said at the weekend that the authorities had “completely lost” an information campaign on coronavirus.

“There is no trust in people to go and vaccinate themselves, it is a fact,” he said.

Putin’s spokesman on Tuesday urged Russians to be “more responsible” and admitted that the government could have done more to explain the “lack of alternative to vaccines”.

“There is a tradition to blame everything on the state,” Dmitry Peskov told reporters.

“But at the same time, we need a more responsible position from citizens of our country.”

Western vaccines are not available in Russia, and Peskov insisted that bringing them into the country would not help the sluggish vaccination rates.

“The vaccinophobia of some citizens is not linked to the brand of vaccines,” he said.

On Monday, the second city of Saint Petersburg announced it would tighten restrictions to battle the virus, introducing a health pass to regulate access to crowd events from 1 November.