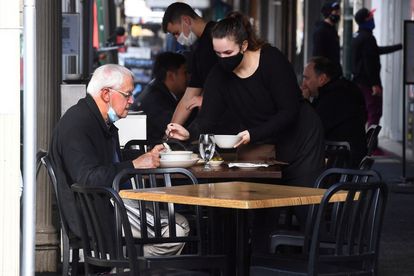 People dine out in Melbourne’s Lygon Street cafe and restaurant strip on June 11, 2021, as the city eases restrictions after a two-week lockdown following a surge in Covid-19 figures.
William WEST / AFP

People dine out in Melbourne’s Lygon Street cafe and restaurant strip on June 11, 2021, as the city eases restrictions after a two-week lockdown following a surge in Covid-19 figures.
William WEST / AFP

Australia’s bid to quash a fast-spreading coronavirus outbreak will see its second largest city lock down late Thursday, bringing the total number of Australians under stay-at-home orders to around 12 million.

Melbourne and the rest of Victoria will join Sydney in a “hard and fast” lockdown, state premier Dan Andrews said, as Australia battles an outbreak of the Delta variant.

The largely COVID-free country has recorded nearly 1,000 cases of the strain nationwide in the last month.

‘Nothing about this virus is fair’ as Melbourne enters fifth lockdown

Andrews said he took the decision to return Melbourne to its fifth lockdown “with a heavy heart” but it was an “absolute necessity”.

“Nothing about this virus is fair,” he said, describing how just 18 cases in Victoria had mixed with thousands of contacts who must now be traced and tested.

“You only get one chance to go hard and go fast,” he said.

“If you wait, if you hesitate, if you doubt, then you will always be looking back wishing you had done more earlier.”

The lockdown will begin shortly before midnight local time on Thursday and last five days.

Sydney in fourth week of lockdown since delta variant

Australia’s largest city, Sydney, is already in its fourth week of lockdown, after the virus spread from overseas aircraft workers to their local driver in mid-June.

Sydney authorities said Thursday that the situation had “stabilised” — with 65 new cases reported in the last 24 hours.

But the lockdown is set to continue for two more weeks to try and eliminate any community transmission.

Australia had been widely lauded for its early handling of the pandemic and successful “COVID zero” strategy.

But a painfully slow vaccine rollout has left just 10 percent of the population protected as many other developed nations are starting to reopen.

The lockdown rules are less stringent than some other countries have seen.

Sydney residents are allowed to leave home for exercise, essential shopping, work or health reasons, but schools are closed and people are encouraged to remain at home.

Since March 2020, Australia’s borders have been largely closed to all non-essential travel in or out.

Australia restricts visitors to 3000 per week

From this month, the number of people allowed to enter the country has been cut to 3,000 a week.

Before any constraints were introduced, around 250,000 visitors arrived every week.

Despite the restrictions, and mandatory 14-day quarantine for most arrivals, the virus repeatedly broke free from inadequate hotel quarantine facilities into the community.

A quarantine-free travel bubble between Australia and New Zealand has been suspended several times as local outbreaks are brought under control.

On Thursday, authorities in Wellington announced flights from Melbourne would be paused for at least four days.

Quarantine-free travel from Sydney had already been suspended.