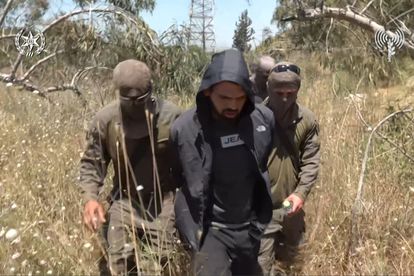 This image grab taken from a video released by the Israeli police on 8 May, 2022 shows Israeli police detaining a Palestinian suspect following a manhunt near the central city of Elad. – Two Palestinians suspected of killing three Israelis in an axe attack in Elad were arrested after a more than two day manhunt, the security services said. Photo: ISRAELI POLICE / AFP

This image grab taken from a video released by the Israeli police on 8 May, 2022 shows Israeli police detaining a Palestinian suspect following a manhunt near the central city of Elad. – Two Palestinians suspected of killing three Israelis in an axe attack in Elad were arrested after a more than two day manhunt, the security services said. Photo: ISRAELI POLICE / AFP

Israeli security services on Sunday arrested two Palestinians suspected of axing to death three Israelis after a more than two-day manhunt, the latest in a spate of deadly attacks.

The security services — who previously identified the suspects as Assad Yussef al-Rifai, 19, and Subhi Imad Abu Shukair, 20 — said the pair were spotted near a quarry just outside the central town of Elad, where the axe attack took place on Thursday.

“We said we would get the terrorists, and so we did,”

Prime Minister Naftali Bennett said ahead of his weekly cabinet meeting on Sunday.

The suspects had been hiding in a forested area, near the quarry, and did not fight with security forces as the arrest was carried out, security personnel at the scene told AFP.

The deadly attack in Elad, populated by mainly ultra-Orthodox Jews, was the sixth in which Israelis have been targeted since 22 March.

ALSO READ: All civilians have been reportedly evacuated from Mariupol steel plant

THE SUSPECTS AND THE ‘AXE ATTACK’

The manhunt included “intelligence and special forces units” from the police, domestic security agency and the army, along with helicopters and drones, the security forces said.

Israel has identified the three dead as Yonatan Habakuk, 44, and Boaz Gol, 49, both from Elad, as well as Oren Ben Yiftach, 35.

The bloodshed unfolded as Israel marked the 74th anniversary of its founding, which has previously been a tense day in the Israeli-Palestinian conflict.

For Palestinians, the anniversary of Israel’s 1948 declaration of independence marks the Nakba, or “catastrophe”, when more than 700 000 fled or were expelled during the war surrounding Israel’s creation.

The Elad killings followed a tense period in which the Muslim fasting month of Ramadan, the Jewish festival of Passover and the Christian holiday of Easter overlapped.

Tensions have boiled over into violent clashes between Israelis and Palestinians at the Al-Aqsa mosque compound, a highly contested site in Jerusalem’s Israeli-annexed Old City.

Palestinian president Mahmud Abbas had condemned the Elad attacks, warning that the murder of Israeli ‘civilians’ risked fuelling a broader cycle of violence.

But the Gaza Strip’s Islamist rulers Hamas and Islamic Jihad, another Palestinian armed group, praised the latest violence, calling it a consequence of unrest at Al-Aqsa. Neither claimed responsibility.

“This operation demonstrates our people’s anger at the occupation’s attacks on holy sites,” “The storming of the Al-Aqsa mosque cannot go unpunished.”

Hamas last week threatened Israel with rocket fire and attacks on synagogues if its security forces carry out further raids on the Al-Aqsa mosque compound.

“Whoever has a rifle must have it ready, and whoever does not have a rifle must prepare their knife or their axe,” said Yahya Sinwar, Hamas chief in the Israeli-blockaded Gaza Strip.

A string of anti-Israeli attacks since 22 March have killed 18 people, including an Arab-Israeli police officer and two Ukrainians.

Two of the deadly attacks were carried out in the Tel Aviv area by Palestinians.

A total of 27 Palestinians and three Israeli Arabs have died during the same period, among them perpetrators of attacks and those killed by Israeli security forces in West Bank operations.