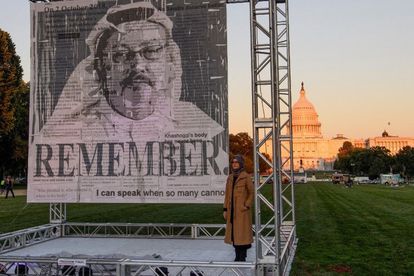 Turkish writer Hatice Cengiz (R), fiancée of Saudi journalist and dissident Jamal Khashoggi, poses next to a portrait of Khashoggi after unveiling it on the National Mall in Washington, DC., on 1 October 2021, during a memorial ceremony marking the third anniversary of his murder at the Saudi consulate in Istanbul. Photo: Nicholas Kamm / AFP

Turkish writer Hatice Cengiz (R), fiancée of Saudi journalist and dissident Jamal Khashoggi, poses next to a portrait of Khashoggi after unveiling it on the National Mall in Washington, DC., on 1 October 2021, during a memorial ceremony marking the third anniversary of his murder at the Saudi consulate in Istanbul. Photo: Nicholas Kamm / AFP

Journalist Jamal Khashoggi was murdered by Saudi agents at the kingdom’s Istanbul consulate in 2018, a gruesome killing that shocked the world.

As a suspected member of the hit squad is arrested in France, here is a timeline of the affair:

The Washington Post columnist, who was critical of powerful Saudi Crown Prince Mohammed bin Salman, fled the kingdom in 2017 to take refuge in the United States.

He is recorded on a camera entering the Istanbul consulate on 2 October 2018, to get a document for his marriage while his fiancee Hatice Cengiz waits outside.

But he never emerges.

As anxiety mounts over his fate, the crown prince declares on 5 October that Khashoggi is not in the consulate, saying: “We have nothing to hide.”

A source close to the Turkish government says the next day that police believe he was murdered inside by a team sent to Istanbul to kill him.

On 7 October The Washington Post cites a US official as saying Khashoggi’s body “was likely dismembered, removed in boxes and flown out of the country.”

Turkey identifies a suspect in the affair as being from Prince Mohammed’s inner circle. Three others are linked to his security team.

On 20 October Riyadh finally admits Khashoggi was killed inside the consulate, claiming this was after a “brawl”.

Saudi Foreign Minister Adel al-Jubeir says it had been a “tremendous mistake” and those responsible acted “outside the scope of their authority”.

On 24 October the crown prince describes the affair as “a repulsive incident”.

Erdogan says in November that the order for the murder came from “the highest levels” of the Saudi government while ruling out King Salman.

The Washington Post on 16 November reports that the CIA believe the crown prince was involved in the murder plot.

But then-president Donald Trump, who is close to Prince Mohammed, says the CIA has “nothing definitive”.

The Senate, however, adopts a resolution holding him responsible on 13 December.

Independent UN special rapporteur Agnes Callamard says in June 2019 there is “credible evidence” linking Prince Mohammed to the killing and calls for an international criminal investigation.

Riyadh rejects her comments as baseless.

In December a Saudi court condemns five unnamed people to death for the killing.

An Istanbul court in early July 2020 puts 20 Saudis on trial in absentia, including two who are close to the crown prince.

Among the accused are two identified by the Turkish investigators as commanders of the operation: Ahmed al-Assiri and Saud al-Qahtani.

On 7 September a Saudi court overturns the five death sentences handed down nine months previously for the murder, jailing eight unidentified people for terms ranging from seven to 20 years.

A redacted US intelligence report is released two days later saying the prince “approved an operation in Istanbul to capture or kill” Khashoggi.

French police arrest Khalid Alotaibi, 33 – a suspected member of the Saudi team that killed the journalist – as he is about to board a flight to Riyadh from Charles de Gaulle airport on a Turkish arrest warrant.