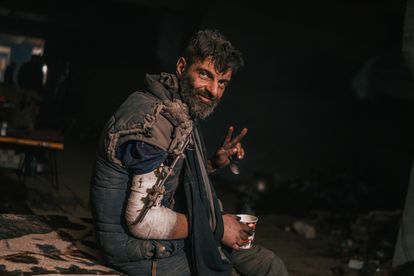 This photo released on 10 May, 2022 by the Azov regiment shows an injured Ukrainian serviceman inside the Azovstal iron and steel works factory in eastern Mariupol, Ukraine, amid the Russian invasion. Photo: Dmytro ‘Orest’ Kozatskyi / various sources / AFP

This photo released on 10 May, 2022 by the Azov regiment shows an injured Ukrainian serviceman inside the Azovstal iron and steel works factory in eastern Mariupol, Ukraine, amid the Russian invasion. Photo: Dmytro ‘Orest’ Kozatskyi / various sources / AFP

The Moscow-installed authorities in Ukraine’s southern Kherson region say they plan to ask President Vladimir Putin to make it part of Russia.

Kherson was the first major city to fall to Russian forces after they invaded Ukraine.

Kirill Stremousov, an official in Kherson’s administration, is reported by Russian news agencies as suggesting the authorities would appeal directly to Putin without putting the move to a vote.

The Kremlin replied that it was up to the residents of Kherson to “determine their own fate”.

30% of jobs in Ukraine — 4.8 million in total — have been lost since the Russian invasion, the United Nations says.

“Economic disruptions, combined with heavy internal displacement and flows of refugees, are causing large-scale losses in terms of employment and incomes,” the UN’s International Labour Organization says in its first report on the consequences of Russia’s war in Ukraine.

“In a scenario of further military escalation, employment losses would increase further to reach seven million, or 43.5%,”

President Volodymyr Zelensky says Russian forces are being driven back from the northeastern city of Kharkiv as a Ukrainian counter-offensive in the area near the Russian border gains traction.

“The occupiers are gradually being pushed away,” he says.

The governor of the Kharkiv region, Oleg Synegubov, confirms that Ukraine has retaken several villages northeast of the country’s second-biggest city.

“Thus, the enemy was driven even further from Kharkiv, and the occupiers had even less opportunity to fire on the regional centre,”

In an interview with the New York Times, the 33-year-old says she first crossed into neighbouring Belarus, a Russia ally, before arriving in EU member Lithuania.

Alyokhina faced jail for protesting in support of jailed Kremlin critic Alexei Navalny. She had already spent two years in prison over Pussy Riot’s 2012 protest performance inside a Moscow church.

Thousands of Russians have fled their country over a crackdown on dissent and sanctions imposed on the country over its war in Ukraine.

Residents have found the bodies of 44 civilians under the rubble of a destroyed building in the eastern town of Izyum, which is under Russian control, Kharkiv’s governor says.

The town, which acts as a gateway to the Donbas region, which Russia has vowed to “liberate,” fell to Russian troops on April 1 after several weeks of heavy fighting.

US lawmakers back $40bn aid package

US lawmakers vote to send a colossal $40 billion (about R642 billion) package of military, economic and humanitarian aid to Ukraine.

“With this aid package, America sends a resounding message to the world of our unwavering determination to stand with the courageous people of Ukraine until victory is won,” House Speaker Nancy Pelosi told her Democratic colleagues ahead of the vote.

The final amount is $6.8 billion (about R109 billion) more than the $33 billion (about R529.7) previously requested by the White House to help the ex-Soviet nation ward off Moscow’s invasion. If passed by the Senate as expected, it will take US spending on Ukraine aid to around $54 billion (about R866.7 billion).